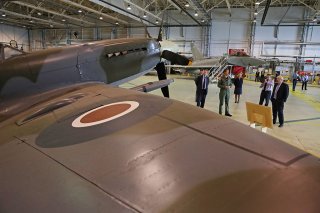 Last November, a World War II M4A1 Grizzly variant of the Sherman tank went up for auction, and while it is unclear who actually bought the tank, it has suggested on some online forums recently that perhaps a Hollywood may have at least bid on it. The actor wasn't named, but it was also speculated it may have been Brad Pitt.

The A-lister had famously starred in the big screen war epic Fury, where he played the commander of a Sherman in the final days of World War II.

Pitt already owns a restored World War II Royal Air Force (RAF) Supermarine Spitfire, which he reportedly spent $4 million to buy after making Fury. The Spitfire isn't a static display piece for him either. The actor has a pilot's license and apparently regularly flies the aircraft when he visits Somerset England where it is stored. However, he did apparently need extra training to handle the World War II fighter, and according to reports received his flight instruction at the Boultbee Flight Academy in Oxford.

While it might seem like an odd choice that Pitt bought a fighter plane after playing a tanker, there is a good reason for that—he already owns a tank. After starring in the 2011 zombie blockbuster World War Z, Pitt decided to purchase one of the props, a Cold War Era Soviet T-54 tank.

The tank wasn't used in any major action scene apparently, but it still managed to catch Pitt's eye. After production wrapped he purchased the tank and had it shipped to his home in Los Angeles. The story about Pitt’s impressive purchase re-circulated on social media recently, and interested parties have pondered whether the tank is operational.

It isn't as if there is a shortage of parts.

The T-54/55 series was the most-produced main battle tank (MBT) in history, and as many as 110,000 of the Soviet tanks may have been produced. The tank was developed at the end of the Second World War and was a marked improvement over the T-34. The T-54/55 had frontal armor that was 100-120mm depending on a variant.

Whether the tank could have survived a zombie apocalypse isn't known—but Pitt is apparently ready just in case. However, he shouldn't depend on the tank in case of a nuclear war, even though Soviet designers sought to develop ways to keep the tank crew protected. While the T-54s were outfitted with emergency NCB (nuclear, chemical, biological) protection systems, and the tanks were able to survive an indirect nuclear strike from a distance, the crews or anyone else inside would still succumb to the radiation aftereffects.

Pitt isn't the only Hollywood star to own such impressive military vehicles. Arnold Schwarzenegger owns—or at least owned—a M47 Patton Tank, while Jay Leno owns his custom-built Blastolene Special, aka “Tank Car,” which was built with an engine from a M47 Patton. The comedian and former Tonight Show host, who is well known for his impressive classic car collection, also owns a 1959 British Ferret Armoured Scout Car Mk2.