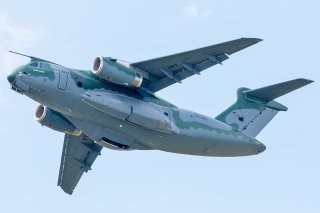 As the coronavirus pandemic swept across Brazil and the country’s military mobilized to respond, the air force got desperate for suitable transport planes.

So desperate, in fact, that it pulled a brand-new Embraer KC-390 Millennium from initial training and rushed it into service hauling medical equipment.

Brazil’s unpopular far-right president Jair Bolsonaro is one of the world’s most prominent pandemic-deniers. But regional authorities and the military have taken the pandemic seriously even as their president has not done so.

The air force has been airlifting relief supplies from Brazil’s major cities to harder-to-reach communities in the country’s heavily-forested northwest. “This is yet another action to confront the novel-coronavirus,” the air force stated. Military aircraft all over the world have undertaken similar missions.

The Brazilian air force operates a large and diverse transport fleet numbering around 120 aircraft. The KC-767 strategic tanker-transport is the biggest.

The 110-feet-long KC-390 is a twin-jet tanker-transport. Brazilian firm Embraer developed the plane to replace the air force’s old C-130s. The air arm received its first of up to 28 KC-390s in September 2019 and assigned it to an air wing at Annapolis airbase in the country’s south-central region.

The KC-390 was flying local training missions for the first cadre of aircrew when the pandemic struck. “In March [2020], we finished the basic phase of training our pilots, which were local flights, and we now begin logistics air-transport flights,” air force lieutenant colonel Luiz Fernando Rezende Ferraz said in a statement.

On April 10, 2020, the KC-390 took off from Anapolis and stopped over in Rio de Janeiro, where the crew loaded 6.9 tons of medical equipment including an ambulance. The KC-390 then proceeded to Manaus, a city of 2.2 million inside the Amazon rainforest.

One of the air force’s C-105 twin-prop transports the same day flew from Sao Paulo to Fortaleza with 30 respirators.

Twin-engine medium airlifters such as the KC-390 and C-105 are in high demand for pandemic-relief missions, as they’re smaller and cheaper to operate than are larger, longer-range strategic airlifters. The smaller medium cargo planes can land at smaller regional airports that can’t support bigger planes.

Twin-prop C-27Js from Peru, Lithuania, and Romania have flown pandemic relief missions. It's worth noting that the C-27J is compatible with mobile isolation kits that some air forces use to transport highly-contagious patients to hospitals.

It’s unclear whether the KC-390 is compatible with the isolation gear.

The relief mission wasn’t totally at odds with the KC-390’s previous training role. Ferraz said the flight to Manaus was an opportunity for pilots, mechanics and loadmasters to practice loading and unloading cargo.