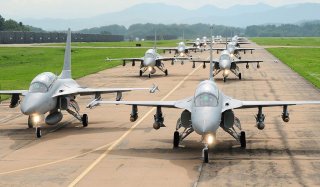 A year after the struggling Latin American air arm selected South Korea’s FA-50 light fighter as its new main warplane, the deal reportedly is on hold, the latest victim of the coronavirus pandemic.

Korea Aerospace Industries on April 6, 2020 announced that its plan to build FA-50s for Argentina “has been put on hold as the coronavirus outbreak is dealing a huge blow,” according to The Korea Herald.

The economic chaos resulting from the pandemic apparently has compelled Buenos Aires to reconsider its spending priorities. The FA-50 contract apparently still was under negotiation and Argentina reportedly will end those talks.

“It must have been difficult for Argentina to spend its defense budget for fighter jets when it is experiencing difficulties due to the virus spread,” a KAI official said.

The Argentine air force back in July 2019 selected the FA-50 as its next fighter. The decision was good news for a once-proud air arm that, in recent years, has precipitously declined in size and effectiveness.

The air force could have acquired as many as ten FA-50s, according to Argentine media. The twelve-ton fighter retails for around $30 million per copy, tens of millions of dollars less than the cost of a new F-16 or similar, heavier fighter.

The Argentine air force badly needs new warplanes. British forces in 1982 shot down around a third of Argentina’s 400 warplanes, but in subsequent decades funding woes and mismanagement have exacted an even greater toll.

It seemed like the air force might be on the rebound. But not everyone was happy, especially Brig. Gen. Mario Roca, who in late 2015 was the air force’s number-three officer. Roca argued that the Israeli fighters lacked a modern weapons system. Only six of them would be equipped with radars, he pointed out.

In any event, the United States refused to grant an export license for the Kfir’s American-made engines and so Argentina was left with no supersonic fighters.

The FA-50s could have helped the air force to begin rebuilding. The navy meanwhile began its own rearmament program. Five ex-French navy Super Etendard fighters in May 2019 arrived at the port of Bahia Blanca in Argentina.

The subsonic fighter-bombers eventually will equip a navy squadron and, by the end of 2020, could be the most sophisticated warplanes in the Argentine military. The FA-50s would have exceeded them in speed, firepower and sophistication.

The Argentine navy previously operated fourteen Super Etendards, acquiring five of them in time for service during the 1982 Falklands War. During that conflict, the Argentine Super Etendards fired Exocet anti-ship missiles and sank two British vessels, a destroyer and a cargo ship.

By late 2017 none of the original Super Etendards were flightworthy, according to Flight’s 2018 survey of world air arms.