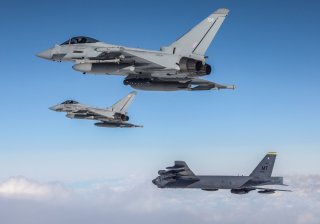 While the Russian military launched an air assault against Ukraine on Wednesday, NATO is ready to counter any aggressive moves over Poland and other alliance members. And while NATO may not intervene militarily against Russia in Ukraine, member countries are now carrying out a historic deployment of air assets to reinforce the alliance's eastern flank.

In response to the invasion, NATO activated elements of its Response Force for the first time, CNN reported. This decision included the deployment of air, land, and maritime assets to reinforce the security of countries neighboring Ukraine and Russia. Among the aircraft deployed are Royal Air Force (RAF) Eurofighter Typhoons, which were sent as part of the NATO mission less than twenty-four hours after Russia began its unprovoked invasion of Ukraine.

The RAF announced that the aircraft were part of a pre-planned Enhanced Vigilance Activity, which is a NATO-led Operation initiated due to the unfolding events in Ukraine.

"This activity providing air support ready to defend the region and is a robust response to Russian aggression, contributing to the security of Europe," the RAF said in a statement.

The aircraft include Typhoon FGR4 aircraft, operating from RAF Coningsby in Lincolnshire and RAF Akrotiri in Cyprus. The Typhoons are reported to be armed with advanced air-to-air missiles as well as a full suite of defensive capabilities. The aircraft are now patrolling NATO airspace over Poland and Romania and demonstrating the United Kingdom's unwavering commitment to NATO. Supporting the mission are RAF Voyager air-to-air refueling tanker aircraft out of RAF Brize Norton.

"RAF Typhoons working in partnership with our allies are continuing to demonstrate our commitment to NATO. We stand ready to defend Europe and the Atlantic region against further aggression," said Air Vice-Marshal Phil Robinson, commander of the RAF's 11 Group. "I am incredibly proud of the courage and commitment of our aircrew operating across the region and of all our personnel who are supporting them."

On Sunday, U.S. Air Force units in Europe and Africa announced that some half dozen fifth-generation Lockheed Martin F-35 fighters had been repositioned in the Baltic Sea region to support the ongoing NATO Enhanced Air Policing missions.

Six other F-35 aircraft from the U.S. Air Force were also deployed to Estonia and Lithuania to continue bolstering NATO's presence in the Baltic Sea region.