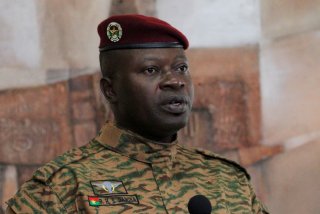 Lt. Col. Paul-Henri Sandaogo Damiba, the leader of the military junta which seized control of Burkina Faso in a military coup d’etat earlier in the year, repeated a pledge to restore civilian rule to the West African nation within two years during a visit to neighboring Cote d’Ivoire on Monday.

“Be assured that the commitments made by Burkina Faso to the international community will be honored,” Damiba said during a press conference in Abidjan, Cote d’Ivoire’s largest city. “[The junta] will organize elections for the return to normal constitutional order.”

Damiba’s trip to Cote d’Ivoire comes as part of a regional tour, marking the first time the Burkinabe officer has left the country since he seized power at the head of the junta. Prior to his visit to Abidjan, Damiba visited Mali on Saturday, where he met with the leader of Mali’s junta, Col. Assimi Goita.

Mali, Burkina Faso, and Cote d’Ivoire have each been affected by a regional jihadist insurgency against West Africa’s governments. After Islamist militants first emerged as part of a civil war within Mali in 2012, they spread across the arid Sahel region, destabilizing successive governments and leading to tens of thousands of deaths. Although Cote d’Ivoire has long been only peripherally affected by this development, insurgents have launched raids from rural Burkina Faso into the country’s north in recent years, leading to growing tensions between the two countries.

Although Cote d’Ivoire has not fully endorsed the Burkinabe junta and has supported a return to civilian rule, Ivorian president Alassane Ouattara vowed that his country would offer its “total support” to the combined campaign against the jihadists.

“Terrorist attacks are a concern for the entire sub-region,” Ouattara said during the two leaders’ meeting. “We should do everything to support each other, to continue to exchange information and have cooperation among security forces.”

In his remarks, Damiba also offered to mediate between Cote d’Ivoire and Mali after Malian security forces arrested forty-nine Ivorian soldiers deployed to the country as part of a United Nations peacekeeping mission. Although three women within the forty-nine-member contingent were released, the remaining forty-six remain imprisoned in Mali, leading to a deterioration in relations between the two countries.

Damiba’s trip abroad comes shortly after a nationwide address in Burkina Faso, in which the lieutenant colonel claimed that the military had “intensified offensive actions” against the insurgents and restored “relative calm” to much of the country’s north and east.

Damiba and other members of the Burkinabe military seized power from the country’s democratically-elected president, Roch Kabore, during a mostly bloodless but chaotic military coup in January 2022. The officers announced shortly after they seized power that they had overthrown Kabore due to frustrations over his leadership during the country’s stalled counter-terror campaign, but would return power to a civilian administration within a short timeframe.