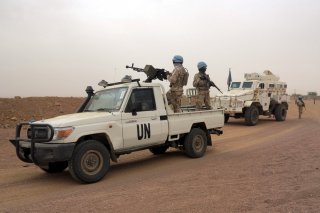 The Malian government announced on Thursday that it has ordered the United Nations to suspend all flights to rotate peacekeeping forces into the country, a step taken after forty-nine soldiers from neighboring Cote d’Ivoire were alleged to have arrived in the country illegally.

“For reasons related to the national security context, the government of Mali has decided to suspend, as of today, all rotation of the military and police contingent [of the United Nations], including those already scheduled or announced,” Mali’s foreign ministry announced on Thursday, according to the Associated Press.

The UN swiftly acknowledged its understanding of the situation. UN spokesman Olivier Salgado later clarified that the international organization was prepared for negotiations with Malian authorities to restart the rotation process, which he characterized as “of critical importance for [the mission’s] operational effectiveness and the morale of its uniformed personnel.”

Salgado also observed that some of the UN’s staff within Mali had been scheduled to be relieved earlier in the year, but events in Mali had prevented the UN from organizing their rotation.

Mali’s government has repeatedly clashed with the UN and Western countries participating in security missions in the country since 2020, when a military junta overthrew democratically-elected President Ibrahim Boubacar Keita and replaced him in function with Col. Assimi Goita, the junta’s leader. A second coup one year later saw Goita consolidate power, dismissing the country’s civilian interim president and assuming the post himself. As the Western world has overwhelmingly opposed these moves, Goita has established closer ties with non-Western powers, notably inviting Russian Wagner Group mercenaries into Mali to replace departing French troops. The Wagner mercenaries were later implicated in a massacre in the town of Moura in central Mali. The Malian government and the Wagner Group have each denied engaging in a massacre, claiming that the targets were anti-government Islamist forces and the operation had been a military success.

Although the UN maintains a peacekeeping presence in Mali, the Malian authorities have issued restrictions on their movements, preventing them from traveling to Moura for investigations into the incidents.

The latest crisis in relations came on Sunday, when Malian security forces arrested the forty-nine UN peacekeeping forces from Cote d’Ivoire over allegedly improper authorization. The Malian government soon claimed that the Ivorian soldiers had given interrogators “four different versions” of why they had entered the country, accusing them of using UN work as a cover for mercenary activity—an accusation that both Cote d’Ivoire and the UN have dismissed as absurd.