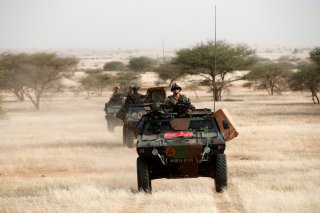 A Russian citizen, reportedly a Wagner Group mercenary helping the government of Mali fight against Islamist rebels, has been killed by a roadside bomb near the rural town of Hombori, marking the first Russian death in Mali’s decade-long insurgency.

The Malian government indicated in an internal memo seen by AFP that the deceased Russian had worked as an adviser for the Malian army. The document indicated that he had been airlifted to a hospital in the town of Sevare but could not be saved. An anonymous official at the Sevare hospital later claimed that the Russian was in his thirties but offered no other information.

Russian troops have been present in Mali since early 2022, replacing the French troops who departed the country after disagreements between the French government and the Malian military junta led by Col. Assimi Goita.

Mali’s Islamist insurgency began in 2012 after Tuareg rebels in the country’s northern Azawad region seceded from the southern-based government, calling on Islamist groups in the sparsely populated Sahel region to assist them. A French military intervention in 2013 initially made substantial gains against the Islamists, but the insurgency spread into neighboring countries, including Burkina Faso, Chad, and Nigeria.

The Malian military government, which seized power from civilian authorities in 2020 and consolidated power in 2021, has denied that the Wagner group is present in the country, claiming that Russian personnel in the country are weapons experts assisting Malian forces with the operation of purchased Russian equipment.

In spite of these claims, international organizations such as the United Nations have probed Russian forces’ involvement in war crimes in the country since the beginning of 2022. The UN announced on Wednesday that it was “extremely concerned” that the Malian government had not allowed its investigators to visit Moura, a Malian town where Malian and Russian troops are alleged to have killed at least 300 civilians during an anti-jihadist military operation in late March. Survivors from the massacre reported that some of the troops involved had been white and spoken Russian, leading the UN to launch an inquiry.

“An independent on-the-ground investigation is critical, and time is of the essence to ensure accountability and prompt, effective justice for victims,” UN spokesperson Seif Magango claimed on Wednesday, according to a statement released by the UN’s Office of the High Commissioner for Human Rights, or OHCHR.

The Malian government has denied the characterization of the incident as a massacre, describing it as a professional military operation and claiming that it would carry out its own internal investigation of whether civilians had been targeted.