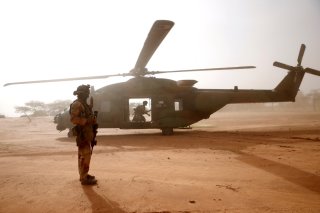 The French government announced on Thursday that it would end its participation in “Operation Barkhane,” its counter-terrorism mission in Mali, and withdraw all French troops from Mali following the objections of the country’s current government to their presence.

Although the ruling military junta in Mali, which seized power in a coup in 2021, approved of the move, several outside observers noted that it could destabilize the security situation in Mali and open additional room for jihadist groups, including the Islamic State’s (ISIS) affiliate branch in Africa, to conduct attacks.

“Today it’s the terrorist groups who are happy with the announcement,” Amadou Koita, Mali’s Minister of Youth and Citizenship under the previous government, told the Associated Press on Thursday.

Although the announcement of the withdrawal was made on Thursday, Koita indicated that it would take up to six months to complete.

“We wanted our country to benefit from the military support of France and Europe, and to make Mali a barrier against terrorism,” the minister said, adding that he hoped that international support for counter-terrorism operations would continue in the country. However, the country’s former Prime Minister, Moussa Mara, claimed that the country’s security would now depend on its people’s ability to defend themselves.

Mali has experienced chronic instability since 2012, when an uprising of the country’s northern Tuareg people—aided by an arsenal of weapons captured from Libyan military storehouses—plunged the country into chaos. To aid in their fight against the Malian government, the Tuaregs made alliances with jihadist groups, who flocked to Mali’s sparsely populated north and ultimately supplanted the Tuaregs as the region’s rulers. The initial French military intervention in 2014 temporarily dislodged these groups, but they have maintained an active presence in Mali’s borderlands and have spread to other neighboring countries, including Niger, Nigeria, and Burkina Faso.

The current Malian government has reached out to some of the Islamist groups, indicating an interest in negotiating peace terms with them. Negotiations are strongly opposed by the French, who regard the jihadist groups as terrorists. At the same time, the groups’ leaders, including the elusive leader of Al-Qaeda’s affiliate branch in West Africa, “Iyad Ag Ghaly,” have insisted that French forces leave Mali before negotiations begin.

Mali has been governed by Colonel Assimi Goita since the 2020 overthrow of President Ibrahim Boubacar Keita. Goita launched a second coup in 2021 to consolidate power and dismiss civilian representatives from the government.