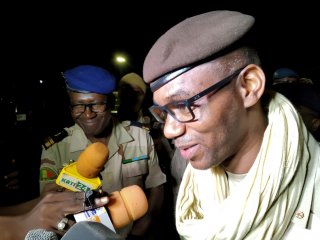 The government of Mali has announced that the country’s religious authorities have been asked to open negotiations with the local affiliate branch of Al-Qaeda in an effort to bring peace to the unstable country.

The Malian religious affairs ministry made the announcement on Tuesday, following a pattern of quiet discussions with the group at the lower level. The group tasked with undertaking the negotiations is Mali’s High Islamic Council, or HCI.

While a number of jihadist groups are active in Mali, the largest and most prominent remains Jama’a Nusrat ul-Islam wa al-Muslimin, or JNIM, Al Qaeda’s affiliate in Mali. JNIM’s leader, Iyad Ag Ghali, is one of the most notorious jihadist leaders in West Africa; nicknamed “the strategist” for his planning abilities, he played a major role in the creation of Ansar Dine, a jihadist group formed in the aftermath of the 2012 uprising by ethnic Tuaregs in northern Mali.

While the proto-state the Tuaregs created, Azawad, eventually ceased to function, the jihadist groups formed in connection with it spread across the Sahel, requiring a multinational effort to contain. France, Mali’s main ally, helped to contain the spreading terror threat through a military intervention in 2013, but violence has continued.

Negotiations with any jihadist groups have been strongly opposed by France, which maintains a presence in the Sahel of roughly 5,000 troops. In the past, French president Emmanuel Macron has declared that French troops would not cooperate with nations engaging in negotiations with Al Qaeda.

However, Macron has also announced a drawdown in French troops in the Sahel, angering Mali’s government and possibly leading to a rupture in cooperation. Malian officials have reportedly floated the idea of hiring mercenaries from Russia’s Wagner Group, a prospect that has concerned Westerners already nervous about Wagner’s influence in other nearby states, notably the Central African Republic.

Malian government officials have also insisted that the negotiations would only take place between the Malian government and Malian fighters, claiming that foreign jihadists would be considered “invaders” and excluded.

No talks have yet taken place, according to the HCI.

While negotiations between the HCI and JNIM would mark the first time the Malian government has openly engaged the terror group, other local groups have sometimes negotiated with them, to mixed results. In March, a peace deal was announced between JNIM fighters and local tribesmen in Niono, in central Mali, but the peace deal broke down in July and violence has resumed.