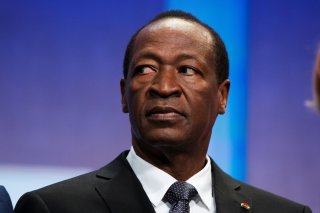 A court in Ouagadougou, the capital of Burkina Faso, sentenced former President Blaise Campaore to life in prison for his role in the murder of his predecessor, Thomas Sankara.

The verdict comes at the end of a six-month trial against Compaore, involving dozens of witnesses who testified that the former president had ordered Sankara’s murder and organized the team that took his life in October 1987.

The verdict, which was announced in a packed courtroom in Ouagadougou, was greeted with applause, and Sankara’s widow, Mariam Sankara, claimed that it had been a victory for “justice and truth,” according to the BBC.

In addition to Compaore, ten other defendants were sentenced to varying terms in prison, mostly in absentia, while three were acquitted. Compaore’s security chief, Hyacinth Kafando, also received a life sentence, although he has not been seen for several years. Gilbert Diendere, the most prominent defendant actually present at the trial, received a life sentence, although he had already been serving a twenty-year sentence for attempting to overthrow the Burkinabe government in 2015.

Burkinabe state prosecutors had originally sought a thirty-year sentence for Compaore, now aged seventy-one. Although the life sentence is ostensibly harsher, it is unlikely that Compaore will serve any time, as the former leader has lived in neighboring Côte d’Ivoire since 2014 and has gained citizenship.

Compaore and Sankara jointly seized power from the previous government in 1983, with Sankara serving as the country’s president and Compaore as his right-hand man. During his four-year rule, Sankara brought sweeping changes to the country, including vast redistribution of land, agricultural, infrastructure, and education campaigns, as well as a rechristening of the country from “Upper Volta,” its colonial label, to “Burkina Faso,” or “Land of the Honest Men.” A committed Marxist often nicknamed “Africa’s Che Guevara,” Sankara nonetheless remained neutral in the wider Cold War, refusing to accept either Western or Soviet assistance over concerns that it could lead to neo-colonial exploitation.

Although his policies led to widespread popularity among Burkina Faso’s lower class and among pan-Africanists elsewhere on the continent, the country’s small elite class opposed him throughout his presidency. After his assassination and Compaore’s succession, many of his reforms were swiftly rolled back. Compaore ruled Burkina Faso from 1987 until 2014 when he was ousted from power in a popular uprising.

From Côte d’Ivoire, Compaore denounced the trial as politically motivated, arguing that the new Burkinabe government, which seized power from President Roch Kabore in a January coup, was using it to gain popularity with the public. However, the trial’s proceedings were initiated well in advance of the coup.