Can America’s Hypersonic Programs Catch Up to Russia and China? 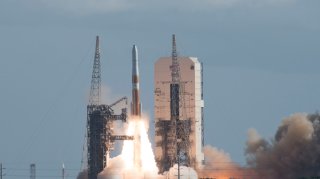 The Congressional Research Service (CRS), a non-partisan agency that compiles information for America’s lawmakers, recently released a report that provides an overview of the United States' hypersonic weapons projects.

The document explains that hypersonic weapons are “maneuvering weapons that fly at speeds of at least Mach 5 [or five times the speed of sound].” The report adds that “in recent years, the United States has focused such efforts on developing hypersonic glide vehicles, which are launched from a rocket before gliding to a target, and hypersonic cruise missiles, which are powered by high-speed, air-breathing engines during flight.”

As former Vice Chairman of the Joint Chiefs of Staff and former Commander of U.S. Strategic Command Gen. John Hyten has stated, these weapons could enable “responsive, long-range, strike options against distant, defended, and/or time-critical threats [such as road-mobile missiles] when other forces are unavailable, denied access, or not preferred.”

Though the development of hypersonic weapons has been ongoing for approximately twenty years, the United States’ projects have received an injection of interest and importance due to advancements made by both China and Russia in their own hypersonic weapons projects.

However, in contrast to the hypersonic missile programs of China and Russia, the United States’ hypersonic missile will be conventionally armed. The CRS explains that, due to the significantly smaller explosive force inherent to conventional weapons, the United States’ hypersonic weapons “will likely require greater accuracy and will be more technically challenging to develop than nuclear-armed Chinese and Russian systems. Indeed, according to one expert, “a nuclear-armed glider would be effective if it were 10 or even 100 times less accurate [than a conventionally-armed glider]” due to nuclear blast effects.”

Defending against hypersonic weapons presents a significant challenge from an engineering standpoint. Today’s air defense technologies are optimized to engage supersonic missile threats, which are quite fast but pale in comparison to the Mach 5+ speeds of hypersonic weapons.

Most of the United States' hypersonic weapons are expected to enter service later this decade.