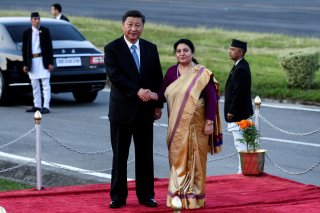 In what is seen as a precaution to avoid the spillover effects of the Taiwan issue on Tibet, China is seeking Nepal’s unconditional endorsement of the One China Policy. Nepalese foreign minister Narayan Prasad Khadka concluded his visit to China, which took place at the invitation of State Councillor Wang Yi. The visit coincided with rising tensions between China and the United States after House Speaker Nancy Pelosi visited Taiwan despite China’s warnings not to.

By inviting Foreign Minister Khadka, China symbolized its preventive measures for Tibet. The major highlights of Khadka’s visit were Nepal’s unequivocal support for the One China Policy, China’s push to reboot the Belt and Road Initiative (BRI) with Nepal, and a $118 million (or 800 million RMB) Chinese grant to Nepal.

In the past, Nepal served as a transit route for Tibetans to escape into India. Many Tibetans took refuge in Nepal and currently, approximately 30,000 Tibetan refugees live in Nepal. The Nepalese security agencies closely monitor their activities due to mounting Chinese pressure.

Occasional movements supporting Tibetan freedom in Nepal put Beijing in a tight spot over its human rights record. Above all, U.S. support for Tibet induced panic in China. While the United States’ support for Tibet has a long history, several high-level visits of U.S. officials to Nepal between February and July this year have kept China guessing.

Although China succeeded in getting reassurances from Nepal on the latter’s security obligations toward Tibet, there was a stark difference between the two statements at the end of Khadka’s visit. While Nepal did not mention BRI—except for the Chinese grant to Nepal for conducting the feasibility study of an ambitious trans-Himalayan railway between Kerung and Kathmandu—China mentioned the BRI twice in its statement.

While Nepal signed a memorandum of understanding (MoU) with China on BRI in May 2017, in recent months China has pressed Nepal to accept more grants than loans under the BRI.

With the fall of the communist government in July 2021, Nepal-China relations have turned cold. Chinese promises to provide transit routes to Nepal for its third-country trade, the Kerung-Kathmandu railway corridor, and Chinese investment in the hydropower projects in Nepal have not moved an inch in the last five years.

There were also no developments on several agreements signed under the BRI, despite Nepal having a friendly communist government until July 2021. Xi Jinping’s visit to Nepal in 2019 was the highest level visit by a Chinese official in twenty-six years. The previous communist government led by Prime Minister KP Oli called it a historical moment in Nepal-China relations. Yet, Nepal’s political resistance to China’s investments and grants was, and remains, visible.

The $118 million grant from China was meant to counter the recent ratification of another grant from the United States to Nepal, awarded through the Millennium Challenge Corporation (MCC) program, worth $500 million. Chinese unhappiness over the MCC grant is evident in several incendiary state-media statements.

Chinese state media branded MCC as a “poisoned pact” and a “threat to peace and development in South Asia.” China attempted to pressure Nepal to abandon the MCC grant by sending several delegations to Nepal. Following the Nepalese Parliament’s approval of the MCC gant on February 27,  the Chinese foreign minister arrived in Nepal in March 2022.

Wang Yi warned Nepal against the external influence on its domestic and foreign policy and offered “three supports,” including help in pursuing an independent foreign policy.

Opposition parties in Nepal, including the CPN-UML led by KP Oli, remain critical of the Deuba government for putting BRI in limbo. Understandably, the Deuba government is cautious about the impact of the Chinese loan model on other states and may be wary of the Sri Lankan crisis.

With a friendly government in Nepal under the leadership of Sher Bahadur Deuba, India seems to be making efforts to resolve political differences after five years of tense bilateral exchanges. After Prime Minister Deuba took the oath of office in July 2021, a high-level delegation led by Prakash Sharan Mahat of the ruling Nepali Congress arrived in India in October 2021.

The Nepalese delegation held talks with Foreign Minister S Jaishankar and the President of India’s ruling Bharatiya Janata Party. Prime Minister Deuba also visited India in April 2022, followed by Prime Minister Narenda Modi’s short visit to Lumbini, Nepal on the occasion of Buddha Poornima in May 2022. This trip resulted in the signing of several MoUs and agreements, including the release of the “Vision Statement” on harnessing Nepal’s hydropower potential.

The recent bilateral exchanges between India and Nepal have contributed to refurbishing the bilateral outlook from “special relations” marked by Roti-Beti Ka Rishta (matrimonial and cultural ties) to mutual prosperity and growth.

While the Deuba administration has managed to balance ties with India, the United States, and China, parliamentary elections in November will play a critical role in shaping Nepal’s future geostrategic outlook.

Contrary to Nepal’s development-oriented engagement with neighboring India and a distant United States, China’s engagement with Nepal is fundamentally driven by safeguarding the loose ends of Tibet. Considering Beijing’s concerns over Tibet, China is certain to wish for a friendly communist government led by KP Oli after the Nepalese parliamentary elections this upcoming November.

However, with Nepal’s communist parties divided, China has a formidable challenge to repeat its past successes in Nepal. Above all, renewed ties between the United States and Nepal are detrimental to Chinese aims in the region.

Rishi Gupta is a Research Fellow at the Asia Society Policy Institute, New Delhi (A division of Asia Society India Centre, Mumbai). His research interests include Himalayan geopolitics—particularly China’s role in Nepal and Bhutan, South Asia, and the Indo-Pacific region. His views are his own.