Not Just Taiwan: India Could Be China’s Next Target 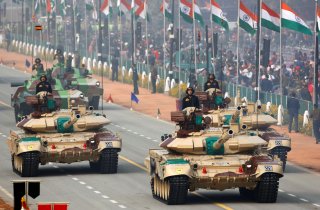 China’s fulminations against House Speaker Nancy Pelosi’s visit to Taiwan are being choreographed as military activism that won’t culminate in any full-blown conflict with the U.S.-led Western powers.

But it is not just Taiwan that needs to worry. India should be increasingly wary of China under these circumstances. Beijing is likely to manifest its retaliation by further cudgeling the neighbor that it considers a soft target rather than provoke a clash with the West by invading Taiwan.

Even as over 50,000 People’s Liberation Army (PLA) troops continue to occupy swathes of the eastern sector of India’s Union Territory of Ladakh at the north-western LAC after their violent clash with Indian soldiers in the Pangong Tso (lake) area in May 2020, China is opening up additional fronts along India’s border states of Uttarakhand, Arunachal Pradesh, and Sikkim.

Beijing has been emboldened by the fact that days after the PLA slew twenty Indian soldiers in eastern Ladakh on June 15, 2020—the first deadly skirmish since the 1962 Sino-Indian war—Prime Minister Narendra Modi said, “No intruder is present inside India’s borders, nor is any post under anyone’s custody.” Modi has not only avoided identifying China as the aggressor but also refrained from bringing up the issue with Chinese president Xi Jinping, which many Indians believe would help defuse the tensions.

Beijing chose the summer of 2020 as the time for its attack because Covid-torn India betrayed deep economic and political vulnerability. It may have discerned military vulnerability as well.

As the stand-off simmers, with troops on either side ranged against each other in this desolate but strategically important desert of the Great Himalayas, a menacing China is steering the situation towards a flashpoint.

China has now planned to forcibly relocate more than 100,000 Tibetans from the northern Tibet Autonomous Region (TAR) to Shannan, or Lhoka, Prefecture in southeastern TAR over the next eight years, contending that the move is to get the people away from “harsh weather and relatively backward production and living conditions”. However, the real consequences would be the end of the traditional Tibetan way of life, with those being relocated unaware of what will happen to them as they are forced into a completely alien way of life.

Lhoka lies close to the border with Arunachal Pradesh, India’s northeastern state that abuts the eastern fringe of the LAC across from the TAR and which China claims as an “inherent part” of its territory and calls “Zangnan,” or “South Tibet.” China has extended a large part of its south to India’s frontiers ever since it annexed Tibet in 1950, and it has pledged to retake Arunachal—by force, if necessary—just as it has vowed to retake Taiwan.

India has rejected China’s contention by asserting that Arunachal has “always been, and will always be, an integral part of India.” Similarly, Taiwan has affirmed that it is a sovereign nation with no need to declare independence; its first woman president, Tsai Ing-wen, maintains that her country will do “whatever it takes” to defend itself.

During an unannounced three-day visit a year ago to Xizang (the Chinese name for Tibet), Xi traveled to Nyingchi, close to the Arunachal border—the first such official visit by a Chinese leader in thirty years. Nyingchi is now linked to Lhasa over 435 kilometers away due to the launch of a high-speed train service, which, according to Communist Party of China mouthpiece Global Times, has been converted into a military transport mission for carrying troops and arms.

According to news reports, Indian intelligence has determined that the PLA has been recruiting young Tibetans and training them with heavy machine guns, mortar bombs, and rocket launchers. Every Tibetan family is mandated to send at least one young member for recruitment, according to Indian news reports. Chinese official media also reported that during his landmark visit to Nyingchi, Xi, who heads China’s Central Military Commission (CMC), the supreme military policy-making body, lauded the border guard battalions in Tibet for doing a “great job” in the last five years.

Former Indian Army Chief Gen. M.M. Naravane has expressed concern at “the largescale build-up” in eastern Ladakh that “continues to be in place.” “So it means that they [PLA] are there to stay,” he had remarked. “We are keeping a close watch on all these developments, but if they are there to stay, we are there to stay too.” A typically hawkish editorial in Global Times exclaimed: “If India starts a war, it will definitely lose.”

Even as the PLA continues to occupy Patrolling Point 15 (PP15) in Hot Springs and PP17A near Gogra post, China has amassed additional troops across the border, armed with artillery, air defenses, combat drones, and heavy vehicles. Apart from creating and extending road and rail connectivity in the border regions, China has also been constructing military airfields for operating both fixed-wing and rotor aircraft.

A Pentagon report confirms the construction of a 100-home enclave and another of 60 houses by China well within Arunachal. As part of its deception warfare at the LAC, China has been constructing “dual-use” border villages and installations, where civilian settlements are being upgraded to military enclaves and civilian airfields are being converted into PLA Air Force bases.

India fears that China’s intrusions are an indicator of what it views as “salami slicing,” whereby Beijing seeks to scythe through Indian, and neighboring Bhutanese, territory with the intent of redrawing the LAC. Ruling Bharatiya Janata Party Member of Parliament Tapir Gao said, “I want to tell media houses in the country that there is no coverage of the extent to which China has captured Indian territory [in Arunachal Pradesh].”

Despite three previous border agreements, Beijing disputes most demarcations with India. In 2017, it had a seventy-three-day standoff with India at the India-China-Bhutan tri-junction of Doklam—the most critical in decades.

In another act of aggression last year, over 100 PLA soldiers and fifty-five horses intruded over five kilometers into Indian territory and demolished infrastructure, including a bridge, at Barahoti in the Himalayan state of Uttarakhand, which has not been a major border flashpoint in years. They returned to base before they could be confronted.

China has also been systematically encroaching into picturesque Bhutan, with satellite images showing fully-developed Chinese villages well within the world’s only Buddhist kingdom. One such settlement, nine kilometers from the Doklam tri-junction, could provide China access to Bhutan’s key Jhampari Ridge, from where PLA troops could outflank Indian defenses in adjoining Sikkim. Jhampari Ridge would also bring the Siliguri Corridor in the Indian state of West Bengal within PLA artillery range. India considers the sixty-kilometer long and twenty-two-kilometer wide corridor highly strategic because it borders Bhutan, Nepal, and Bangladesh and connects its eight north-eastern states, including Arunachal, with the rest of the country.

Some 200 PLA soldiers also reportedly crossed the LAC in Arunachal’s Tawang area last year to target Indian defenses but turned back without any scuffle. Tawang is particularly contentious for the Chinese, for it was in this town that the 14th Dalai Lama found initial refuge in India after having dodged the Chinese Army on his flight from Tibet’s provincial capital Lhasa in 1959. China has always resented India’s decision to provide sanctuary to the Dalai Lama, whom it does not recognize as the spiritual leader of Tibetan Buddhism.

India nonetheless realizes that while the United States regards it as a vital strategic partner, Washington has not been proactive either politically or militarily in addressing Beijing’s military posturing on its land borders with India. India alone must manage to stand its ground against Chinese aggression.

While Washington is mandated to defend Taiwan, it is clearly not inclined to provide “boots on the ground” support for India, nor does it seek to establish any military bases in or around the country as a counterpoint to Chinese hegemony.

It is this situation that emboldens the People’s Republic of China in its transgressions against India.

Sarosh Bana is Executive Editor of Business India in Mumbai, the Regional Editor for the Indo-Pacific of Germany’s Naval Forces journal, and India Correspondent of Sydney-based cyber security journal, Asia Pacific Security Magazine (APSM). Sarosh studied in India, Switzerland and Germany, and has been a member of the Board of the East-West Centre (EWC) Association, a Hawaii-based think tank.