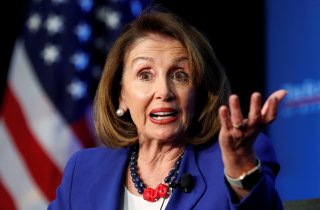 Speaker of the House Nancy Pelosi’s rumored upcoming trip to Taiwan has divided Capitol Hill along unusual lines, with the administration of President Joe Biden urging caution while lawmakers hostile to Beijing—including conservative Republicans strongly opposed to Pelosi on most other issues—have defended the trip as necessary to demonstrate U.S. strength abroad.

The alleged battle over the trip, which has yet to be scheduled, appears to have been fought mostly behind closed doors. Pelosi and her office have not confirmed that the speaker is planning to visit the democratically-controlled island, which mainland China claims as a rebellious province rather than an independent nation and has repeatedly threatened to invade if it cannot gain control over the island through nonviolent means. While President Joe Biden is thought to have opposed the trip, he has not yet voiced his concerns in public, although he observed that members of the military had suggested that the visit was “not a good idea” in the current political climate.

White House press secretary Karine Jean-Pierre claimed that Pelosi and other members of Congress would “make their own decisions” when it came to foreign travel, while State Department spokesman Ned Price reiterated the U.S. commitment to the “One China” policy, which in practice does not recognize Taiwanese independence but allows for limited political and military cooperation between Washington and Taipei.

In the run-up to the trip, China’s Foreign Ministry claimed that Pelosi’s visit would “severely undermine China’s sovereignty and territorial integrity, gravely impact the foundation of China-U.S. relations and send a seriously wrong signal to Taiwan independence forces.” Spokesman Zhao Lijiang claimed that the Chinese government would take “resolute and strong measures to safeguard its sovereignty” in the wake of the visit, although he did not provide further detail.

This response, however, increased tensions on Capitol Hill, with Sen. Ben Sasse (R-Neb.) claiming that it necessitated forceful U.S. action. “Speaker Pelosi should go to Taiwan, and President Biden should make it abundantly clear to [Chinese President Xi Jinping] that there’s not a damn thing the Chinese Communist Party can do about it,” Sasse said.

Biden is slated to call Xi later in the week, in spite of his positive test for COVID-19 over the weekend.