Crisis in the Strait? China Outraged at Pelosi's Plans to Visit Taiwan 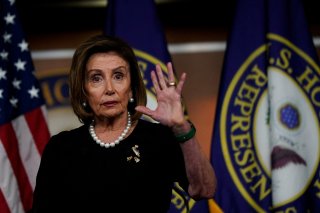 Beijing will take “strong and resolute” measures if the speaker of the U.S. House of Representatives, Nancy Pelosi, proceeds with plans to visit Taiwan, Chinese officials said on Tuesday.

“If Speaker Pelosi visits Taiwan, it would seriously violate the one-China principle … It will have a severe negative impact on the political foundation of the China-US relations, and send a gravely wrong signal to ‘Taiwan independence’ separatists forces,” said Foreign Ministry spokesperson Zhao Lijiang during a briefing. “If the U.S. were to insist on going down the wrong path, China will take resolute and strong measures to safeguard its sovereignty and territorial integrity,” he said, adding that “the United States must be fully responsible for all the consequences caused by this." Zhao did not specify what China would do in response to Pelosi’s visit. The Chinese military has previously employed large-scale regional military exercises and incursions into Taiwan’s air defense identification zone (ADIZ) to signal its discontent over Washington’s relationship with Taipei.

“The Chinese People’s Liberation Army ... will resolutely thwart any form of interference by external forces and separatist plots of ‘Taiwan independence,” China’s defense ministry said in a separate statement.

It was reported earlier that Pelosi was scheduled to visit Taiwan in April but had to postpone after testing positive for Covid-19. According to two sources cited by Politico, Pelosi is due to visit Taiwan next month. She would be the highest-ranking U.S. lawmaker to visit the self-governing island since House Speaker Newt Gingrich in 1997.

The United States has long adhered to a “one-China policy,” which acknowledges that there is only one sovereign China but does not implicitly endorse Beijing’s position that Taiwan is part of the People’s Republic of China. By contrast, the Chinese Communist Party’s “one-China principle” states that there is only one China and that Taiwan is an inalienable part of China.

Though Washington does not maintain a formal diplomatic relationship with Taipei, the United States is Taiwan’s most important military partner and continues to provide the island with large volumes of military aid intended to help it deter and defeat a possible Chinese invasion.