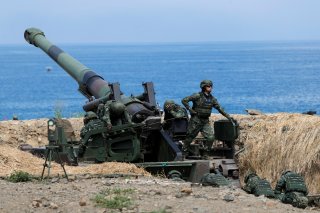 A spokesperson from the People’s Liberation Army (PLA) Eastern Theater Command warned that U.S. support for Taiwan could become “dangerous, with the U.S. facing serious consequences.”

The Chinese government-backed Global Times suggests that the Chinese response is related to President Biden’s recent statement that the United States would intervene militarily to defend Taiwan in the event of military conflict with China.

“Taiwan is a part of China, and the theater command troops are determined and capable of defeating any secessionist attempts by external or ‘Taiwan independence’ forces, and firmly safeguarding national sovereignty and security as well as peace and stability in the region,” a Chinese military spokesperson said, according to the Global Times.

An official from China’s Ministry of Foreign Affairs also warned that the United States would face “unbearable costs” for “​hollowing out the one-China principle.”

“...[B]y either openly or secretly encouraging and supporting ‘Taiwan independence’  secessionist activities, the U.S. will not only bring consequences to China-US ties that would be beyond repair, but also lead to unbearable costs for the U.S.,” the official told the paper.

The Chinese warning escalated threatening language and included multi-service war drills around the island of Taiwan.

The exercises—which the Times said included units from the PLA Navy, Army, Air Force, and Rocket Force—likely included amphibious assault preparations. The war training “targeted the collusion between the U.S. and Taiwan secessionists,” the paper said. Chinese military officials were also quoted making ambitious comments about China’s military capabilities, saying that “neither the armed forces on the island of Taiwan nor other countries' military forces—including the U.S.—can stop the PLA from reunifying the island, as the PLA now has overwhelming military advantages on the doorsteps of China, as shown in the drills.”

Referring to the drills as “realistic combat exercises,” the Times cited Taiwan’s relative geographical isolation and specifically made the point that the island nation would not be able to embark upon what it called a “proxy” war similar to the war in Ukraine.

“With geographical weaknesses, the isolated island of Taiwan can never become a US proxy in a protracted war like that in Ukraine, experts said, noting that with more drills, the PLA's combat plans are becoming more mature,” the paper said.