Can China's Military Really Defeat Mines in a War Over Taiwan? 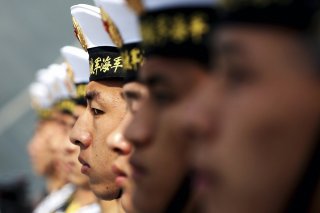 A Chinese newspaper is claiming that the People's Liberation Army Navy successfully completed complex countermine operations using sweeping “flotillas” to clear sea lanes from mines, as part of a visible initiative to threaten Taiwan with the prospect of a successful amphibious attack.

“PLA has sufficient capability to thwart any attempt of deploying sea mines to obstruct the PLA's operations, and Taiwan's tactics of laying mines in the Taiwan Straits to buy time for US reinforcements will not succeed,” the Global Times reported.

Despite the ambitious claims by the paper, the actual extent of Chinese countermine proficiency does seem to remain as somewhat of an open question.

Citing a Reuters report, the Global Times also writes that “US is pushing an arms sales surge to Taiwan, including smart, underwater sea mines. Taiwan has also been constructing mine-laying vessels, the first of which is expected to be delivered by the end of the year,”

The Global Times also reports that the PLA used sonar systems and “mine-sweeping” robots to detect and destroy the mines, however very little additional detail was provided.

Despite the Chinese claim that its technologies could find and neutralize “smart mines,” there was little to no evidence provided. Mines are becoming increasingly sophisticated with proximity detonation, moored mines with others buried beneath the surface.

The key question is this: does China have mine-detection capabilities that are in any way comparable to emerging U.S. systems?

For example, the U.S. Navy is rapidly developing an underwater drone called Barracuda which uses wireless or untethered sensing to find mine mines while keeping humans at a safe standoff distance. The Barracuda can also itself become an explosive and detonate mines underwater using a sensor to identify the mine’s location.

Also, while the Chinese reportedly have mine-sweeping sonar, that by no means guarantees that they have anything close to the U.S. Navy’s emerging AQS 24; the AQS 24 is a sonar engineering with fast mine-sweeping detection capabilities as well as laser-scanner sensing to succeed in more precisely finding mines quickly.

The Chinese paper does say that countermine systems used to detect a “magnetic field change,” caused by ships moving by were effective, however, that claim also appears unverified and does not indicate a technical ability to quickly find large minefields in calm waters or buried beneath the ocean floor.

In addition to clearing different types of sea mines, including drifting and moored mines, the ships also conducted live-fire anti-aircraft exercises, the report said. As part of these additional combat tactics, the Chinese paper says that in the event that mines could not be cleared, the PLA could “carry out airborne landing operations” to avoid sea mines altogether. This represents a clear effort on the part of the Chinese to sustain the threat of an amphibious takeover, despite the proficiency of Taiwanese-laid mines.

Image: Chinese navy personnel stand at attention onboard the Chinese frigate Wenzhou at the port of Qingdao, Shandong province April 22, 2009. China will show off its resurgent naval strength this week at a parade marking 60 years since the founding of its navy, presenting its fleet of warships and nuclear submarines as a force for peace, not aggression. REUTERS/Guang Niu/Pool (CHINA POLITICS MILITARY)