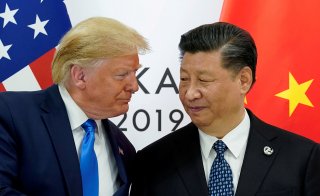 What is a well-known, yet lesser-recognized variable or decisive factor which can often determine victory and defeat in war?  What is one factor that historians often point to when explaining Hitler’s failed invasion of Russia in World War II? Logistics.

While there were doubtless many factors contributing to the Nazi defeat at Stalingrad, one often discussed reality was simply that—attacking German forces ran out of supplies in harsh winter conditions. No fuel, no food, no clothing can in many instances easily equate to . . . no victory.

It is as simple as it may be self-evident. Military conflicts cannot be won in most cases without food, fuel, water, clothing and other essentials. These things are of course delivered through supply lines, a reason which explains why they are often the first things targeted when war breaks out. Crippling an enemy’s ability to function in any simple logistical way can translate into rapid gains in war.

What all of this means is that security, military progress, safety and the very lives of Americans, hinge upon the safe, secure “transportation” of supplies. This circumstance pertains not only to foreign warzones but is also of great importance to civilian safety, emergency responders and those tasked with supporting military readiness here in the United States.

This is one reason why the U.S. government has reserved 5.9 Gigahertz of wireless spectrum for the specific transportation safety-related functions of automated vehicles such as driverless cars, unmanned supply trucks and other increasingly used self-navigating road platforms.

Free, fast, safe passage of these robotic vehicles, which are multiplying at alarming speeds as technology matures, can be enabled by this “Safety Band” of preserved spectrum.

Perhaps it can best be explained in the context of a theoretical crisis scenario. Let’s say the U.S. Army is advancing quickly upon enemy positions in a hard-fought ground war, suffering heavy casualties under enemy fire, when commanders realize the war gains need to be solidified and advanced by an unexpected continued assault. The strategic change means forces would need to operate forward in attack mode much longer than was anticipated. Perhaps they are operating in an austere location less accessible to local supply lines or sufficient amounts of food, water and essentials were not available near the area of combat operations? New supplies and replenishments might in some cases need to come from the continental United States and therefore rely upon the fast, safe passage of unmanned vehicles.

Desert Storm, for example, included at least 470,000 people and 465,000 tons of cargo to include bullets, machine guns, artillery and many non-military specific supplies such as sleeping bags, medical supplies or even toilet paper, according to a veteran familiar with the effort.

Should overseas supplies run short, many necessities might need to come from the United States . . . quickly. Seaports, airports and other points of departure would immediately be in desperate need of receiving war-essential supplies to support forward-positioned forces.

In modern times, safe, fast-moving unmanned vehicles, fast on the rise in the United States, would in the event of military crisis or heavy deployment need rapid passage through green lights, heavy traffic, navigational obstacles or other ground-transportation impediments.

Enter the U.S. “Safety Band,” large amounts of spectrum set aside to assure safety and efficiency in the event of a transportation-related emergency in the United States.

“If there is an accident, it is going to delay or damage vital goods the military needs to fight a war. US TRANSCOM (military transportation command) is inextricably linked to the commercial transportation industry,” a senior government official told the National Interest.

“Unmanned vehicles need to interact using this dedicated interference-free Safety Band. By doing this, high-precision devices enable communication between traffic lights and adjust communications to give emergency vehicles safe passage in heavy traffic. Automated cars can’t see around corners, they rely on the dedicated safety band to communicate with them to prevent accidents. The future is automated vehicles and they need to communicate to avoid accidents,” the official said.

The critical importance of this issue is now taking on new urgency in light of a current FCC proposal to remove forty-five of the seventy-five megahertz set aside to the Safety Band’s to unlicensed WiFi which, the official believes, “will compromise military readiness.”

“Losing the spectrum would make the U.S. less safe. The lack of a Safety Band for connected automated vehicles would compromise readiness from inside the U.S.,” the official said.

While the military implications are something of extreme importance likely to come to mind quickly, there are other emergency conditions potentially in need of a Safety Band as well, such as those created by natural disasters or, heaven forbid, another terrorist attack on the U.S. homeland requiring the immediate transportation of first responders and critical life-saving supplies.

Despite all of this, impairing U.S. transportation safety is not the only risk presented by dismantling the Safety Band and opening it up to what the official referred to unlicensed wifi including “a family of transmitters using different frequencies.”  In short, massive amounts of new hardware, transmitters, software and alternative frequency use could flood the commercial market, complicating, interfering with or even disabling the Safety Band to some extent.

“Unlicensed wifi can compromise the speed of vehicles and put lives at risk,” the official explained.

Moreover, losing that much spectrum would require substantial modifications to the existing Safety Band and present potentially unintended security risks such as “opening the door to nefarious Chinese technology that was not inserted before,” the official explained.

Chinese interference is of particular concern for a number of specific reasons, not the least of which is the well-known reality that the communist country seeks to expand its global influence and control through investments in technology and regional economic interests. The Chinese telecom industry,  the official explained, has very “close ties to the Chinese government,” an entity long-known to make various attempts at espionage using technological infiltration into foreign markets. This can take the form of computer chips built for U.S. technical systems or even weapons, interference or intrusions into global satellite markets, cyber-espionage through commercial IT systems or more simple efforts to dominate or take over technical standards allowing for the insertion of Chinese technologies.

“It is very difficult to make sure you only get secure things into the supply chain. Safety-critical systems are going to be threatened by China and, quite possibly, Chinese economically-driven espionage. This could disrupt U.S. traffic and safety communication. Accidents could happen at an alarming rate, and the loss of the Safety Band would interfere with military radar test ranges.”

U.S.-based military radar also relies upon the Safety Band, a circumstance which further underscores the need for its preservation.