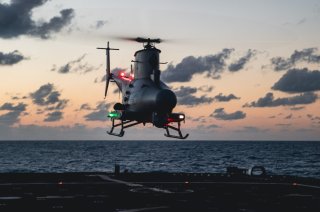 The U.S. Navy is increasingly relying on drones and unmanned systems as reconnaissance tools able to operate within a network of nodes designed to process and transmit time-sensitive targeting data.

There is a progressive effort to quickly process incoming sensor data at the point of collection using artificial intelligence (AI)-enabled technology. This can improve efficiency and enable a drone like an MQ-8 Fire Scout to quickly identify and transmit time-sensitive data across the force to a range of nodes including surface ships, helicopters, armed drones, and fixed-wing aircraft. There is also the question of continued modernization, given the pace at which networking, data processing, and targeting technologies are emerging

“We’re actively working on building more autonomy into the mission capabilities.  Operators are getting so much information from the sensors, we are working to use machine learning and AI to be able to really distill that information down to what the operator needs to see, so that they can make better decisions. This can involve telling the aircraft where to fly based on the mission picture and then respond and go to those areas, and automatically do radar collections or EOIR imagery,” Lance Eischeid, director, Fire Scout program, Northrop Grumman, told The National Interest in an interview.

There is a key intelligence, surveillance, and reconnaissance (ISR) function the Fire Scout drone could perform as well, namely, as an aerial node linking warship command and control systems with threat data from beyond the horizon. However, the U.S. Navy has been using manned platforms since 2015. A new program, Naval Integrated Fire Control-Counter Air (NIFC-CA), operates from U.S. Navy destroyers. It is an integrated system that uses Hawkeye surveillance planes or even F-35 fighter jets to relay threat data, such as enemy anti-ship missiles, from distances well beyond the radar ranges of surface ships. Once received this data cues a surface ship to fire an SM-6 interceptor missile to track and destroy the approaching anti-ship missile. This enables ship commanders to have more time to decide what their countermeasures will be.

Yet, with advances in autonomy and networking, it seems entirely conceivable that a Fire Scout drone or other unmanned platforms could perform this kind of data transmission operation.

Autonomy and networking are critical to the U.S. Navy’s overall effort to expand its drone fleet. For many years, the service has been working on a “Ghost Fleet” concept where groups of surface, air, and undersea drones use AI-powered algorithms to coordinate movements, tactics, and mission specifics with each other in support of an overall mission objective. This will be significant when it comes to the rapid development of U.S. Navy unmanned surface vehicles.