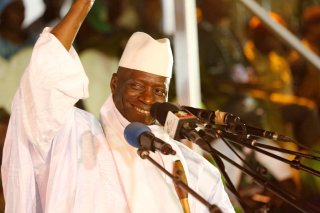 Former Gambian dictator Yahya Jammeh ignored a warning by President Adama Barrow not to campaign for an allied candidate in the country’s upcoming presidential elections on Thursday, speaking remotely at a rally for high-profile opposition candidate Mama Kandeh.

Jammeh had earlier endorsed Kandeh as his choice for the presidency. So far, six candidates, including Barrow and Kandeh, are registered for the election, which is scheduled to take place on December 4.

Jammeh, who served as the Gambia’s president from 1996 until 2017, remains a highly polarizing figure in the country. His erratic twenty-two-year rule over the Gambia was widely condemned abroad for its brutality, reliance on extrajudicial methods of control, and disregard for human rights, and Jammeh was accused of stealing millions from the country’s treasury and using it for personal ends.

Jammeh’s rule came to an end after his loss in the country’s December 2016 presidential election to Barrow. Instead of conceding, Jammeh indicated he would not recognize the result and demanded Barrow’s arrest, leading Barrow to flee to neighboring Senegal. The following month, the Economic Community of West African States launched a joint military intervention of the Gambia, toppling Jammeh and installing Barrow as the country’s president.

The former dictator has lived in Equatorial Guinea since 2017 as a guest of Equatoguinean dictator Teodoro Obiang. While in exile, he and his wife have been sanctioned by the U.S. government under the Global Magnitsky Act, used to impound U.S. assets of suspected human rights violators.

While many Gambians oppose Jammeh, a number continue to support him, and others have been alienated by the actions of Barrow, who initially insisted that he would only play a transitional role in the country’s politics and would not run for re-election before changing course. While Jammeh’s political party, the Alliance for Patriotic Reorientation and Construction, has allied with Barrow, Jammeh has not thrown his support behind Kandeh, Barrow’s most prominent challenger.

In his remarks on Kandeh’s behalf, Jammeh claimed that Barrow had stolen the 2016 election and “destroyed the country” during his five-year term. He promised that Gambians would receive free education and free medical care if they voted for Kandeh, implausibly claiming that it would become “one of the most developed countries in the world” under Kandeh’s leadership.

The participation of Jammeh in Kandeh’s campaign has infuriated the Barrow government, although it has been unable to point to a specific law disallowing the former dictator’s support.