Can a Last-Minute Triple Endorsement From Former Candidates Save Joe Biden's Campaign Against Bernie Sanders? 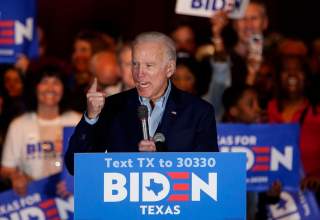 Last evening former Vice President Joe Biden’s presidential campaign achieved a coup de grace, with a triple endorsement announcement at his rally in Dallas, Texas. Three former competitors, former Mayor Pete Buttigieg of South Bend, Indiana, Senator Amy Klobuchar of Minnesota, and former Representative Beto O’Rourke of Texas all endorsed Biden to be the Democratic nominee. Their endorsements, and reasons for doing so, demonstrate the pitch Biden will continue to make to voters in the general election.

“We are in the battle for the soul of this nation,” Biden said in his announcement video in April last year. His goal is show that the election of Donald Trump is “an aberrant moment in time” that can be overcome by pre-2016 politics. That meshes with Biden’s pitch as the legacy candidate of the Barack Obama administration. And his surrogates were happy to take up the mantle.

“If you feel tired of the noise and the nonsense in our politics, and if you are tired of the extremes, you have a home with me. And I think you know you have a home with Joe Biden,” Amy Klobuchar told the Texas audience. Klobuchar also emphasized the need for voters to coalesce around Biden’s candidacy in order to prevent an extended primary slog between the former vice president and current frontrunner Senator Bernie Sanders of Vermont. “If we spend the next four months dividing our party and going at each other, we will spend the next four years watching Donald Trump tear apart this country.”

“So, what I want all of you to do is vote for Joe. Vote for decency. Vote for dignity. Vote for a heart for our country. That’s what he will bring to the White House,” Klobuchar closed, using the same language the other candidates used to describe the seventy-eight-year-old.

“We need a politics that’s about decency, that brings back dignity. That’s what we sought to practice in my campaign, that’s what Joe Biden has been practicing his entire life,” said Pete Buttigieg in a smaller press conference before the rally. “He reminds me of my son Beau,” Biden said, complimenting the young former mayor by comparing him to his departed son. Joe Biden has used the same description on previous occasions.

While Buttigieg and Klobuchar suspended their campaigns on Sunday and yesterday, respectively, Beto O’Rourke departed the race back in November. He had gained national attention for his 2018 senate race where, despite losing, he gained more votes than any other Democrat in Texas history.

“Tomorrow, March 3, 2020, I will be casting my ballot for Joe Biden. And let me tell you why. We need somebody who can beat Donald Trump,” Beto said, interspersing his statements with lines of Spanish. Biden is the “antithesis of Donald Trump. Joe Biden is decent. He’s kind. He’s caring. He’s empathetic.”

Biden reciprocated the feeling. “I want to make something clear. I’m going to guarantee this is not the last you see of this guy,” he said. “You’re going to take care of the gun problem with me. You’re going to be the one to lead this effort.” As a presidential candidate, O’Rourke made gun control one of his signature issues. This included the promise that the federal government would criminalize the ownership of specific firearms like the AR-15, and subsequently seize them from current owners.

These endorsements, built around Joe Biden as the candidate of decency and dignity, will carry forward to the general election against Donald Trump only if Biden is first able to defeat Bernie Sanders in the Democratic primary.