Senator Amy Klobuchar Ends Her 2020 Campaign and Will Support Biden 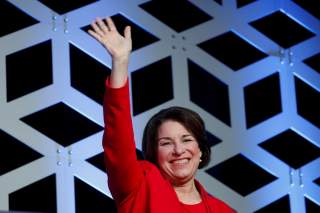 This afternoon Senator Amy Klobuchar of Minnesota announced the suspension of her presidential campaign. Her departure comes on the heels of Pete Buttigieg, who ended his campaign yesterday. Both candidates are expected to give their endorsements to former Vice President Joe Biden at a rally in Dallas this evening. This rush to Biden, in the days after his blowout victory in the South Carolina primary, stands as a final maneuver by Democratic Party moderates to prevent the nomination of democratic socialist Bernie Sanders.

Klobuchar began her “Amy for America” presidential campaign in February of last year, making her announcement in the middle of a Minnesota snowfall. The two-term senator pitched herself as a successful legislator who was able to work across the isle to achieve actionable political results. Her homespun demeanor and flat, midwestern humor made her, in in supporter’s minds, the perfect candidate to retake the Rust Belt from President Trump in 2020.

Over the course of 2019, Klobuchar became a stand-in for moderate Democratic voters. During debates she would intone about her political success, having never lost an election and having widespread support among Republican voters. On the campaign trail, when both Buttigieg and Sanders said the Democratic Party had no place for pro-life voters, Klobuchar said they would be welcome in her big-tent party. She pushed back against the concept of Medicare for All, saying it was too expensive to ever be a reality and would deprive millions of Americans of their already functioning health insurance.

The fifty-nine-year-old invested heavily in Iowa, next door to her home of Minnesota, and became the first candidate to visit all ninety-nine counties. This effort did not pan out, however, when Klobuchar came in a disappointing fifth place, barely cracking double digits. Where her campaign made headway was in New Hampshire, where following a strong debate performance she rocketed up to a close, third place finish. This defied the expectations set for her campaign, and put her ahead of Elizabeth Warren, her female senate compatriot from neighboring Massachusetts.

Unfortunately for Klobuchar, this electoral boost and the subsequent fundraising came too late in the campaign to make a difference. In 2019, the senator failed to break into the top tier of candidates, raising $30 million less than the donation-challenged Joe Biden. Moreover, in both Nevada and South Carolina she finished in sixth place for the same reason Pete Buttigieg’s campaign stalled: an inability to appeal to people of color.

Less than twenty-four hours before voting is set to begin on Super Tuesday, with fifteen simultaneous primaries, Klobuchar was leading in Minnesota, several points ahead of Bernie Sanders. It’s yet to be seen how her departure, and subsequent endorsement of Biden, will benefit the former vice president’s margins across the country.

However, since her entry into the race, Amy Klobuchar has been touted by the media as an ideal vice-presidential pick, a notion that has only gained more traction since her announcement hours ago.