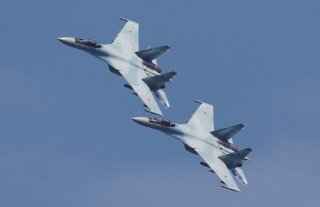 Thus far, the Russian assault on Ukraine has not relied heavily on air power, a notable distinction from what is commonly assumed to be the modern way of conducting warfare where airstrikes soften a target in advance of offensive ground operations.

Available information suggests that most Russian weapons are being fired from the ground, although the U.S. Defense Department is reporting some attacks have come from the air.

A Defense Department report on the Russian attacks did identify some of the key Ukrainian targets hit by cruise missile strikes.

“Russia has launched at least 160 short-range, medium-range and cruise missiles into Ukraine from land, sea and air, the official said, and more Russian troops have entered Ukraine. The missiles are aimed at military bases and airfields around Kharkiv and Kyiv. Again, there is no way to verify how accurate they are or what casualties they are causing,” the report said.

Up until this point, Russia’s attacks appear to be limited in scope and targeted against specific military targets, air fields, and supply facilities, perhaps as part of an effort to preserve Ukraine’s cities and basic infrastructure. This may also be part of a decided effort to limit civilian deaths and take over Ukraine without having to kill large numbers of Ukranians.

However, the Defense Department’s report said that “Ukrainian units are fighting the Russian invasion,” but indicated that there was no way to “categorize” the nature of the resistance. At the same time, Ukrainian forces might have reason to pause before taking up house-to-house close combat with Russian infantry, due to the Russian military’s numerical superiority and the presence of civilians.

Global Firepower reports that Ukraine operates roughly 200,000 active duty military forces, less than one-fourth of Russia’s 850,000 Army. Despite this numerical imbalance, large-scale infantry confrontation may soon unfold as Russian units seek to close in upon and take over Kyiv, the Ukrainian capital, and other major cities. These kinds of engagements, should they unfold in a serious way, could be catastrophic to Ukraine’s urban infrastructure and civilian population.