Can the U.S. Army Solve Its Air-Defense Gap? 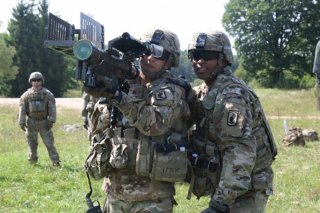 The imperative, long on the radar for Army leaders and modernization experts, is grounded in a need to ensure the Science and Technology (S&T) community and the Research and Development community are aligned, if not interwoven with urgent demands coming from soldiers at war and fast-emerging great power threats.

While for years there has been successful research and innovation within the Army, some promising programs related to air defense never fully saw the light of day, a circumstance which some believe left the Army with a troubling air-defense gap.

Medium range air defense was a Cold War priority which, service senior leaders say “atrophied” during the war on terror. As a result, the Army was confronted with a massive need for next-generation air defense weaponry.

“We have to build capacity. We don’t have enough. There is a reason why the Patriot [missile] force has the highest op tempo .. combatant commanders want it,” Maj. Gen. Robert Rasch, the Program Executive Officer for Missiles & Space, told an audience at the Space and Missile Defense Symposium on August 11 in Huntsville, Alabama.

Rasch explained that he did research going back nearly twenty years to determine the extent to which Army-funded Research, Development, Test & Evaluation (RDT&E) translated into deployed weapons systems. What he found was that there was indeed a strong, rich history of Army innovators developing and fast-tracking promising new weapons programs. Yet many key air-defense systems were cut, canceled or ultimately not brought to production and deployment. Rasch looked at areas of investment and modernization decisions as far back as 2005 through 2013, saying at one point air defense was specifically shelved to address pressing war demands in Iraq and Afghanistan.

“We took air-defense weapons off of the Bradley [fighting vehicle] because we did not see that air threat materialized. We have invested in Air Defense over the years, but what you at times don’t see is the procurement tail on the back end of that research," Rasch explained.

Rasch and other Army leaders cited three weapons systems in particular. He cited the SLAMRAAM air defense weapon, a Surface Launched Advanced Medium-Range Air-to-Air missile designed to track and destroy air threats much like a fighter-jet mounted air-to-air missile would. The SLAMRAAM showed great promise years ago, as it could have offered the Army an ability to track and destroy enemy drones, helicopters or even lower-flying fighter jets with precision from the ground. Since air-to-air AMRAAMs can fire on the move, it certainly seems conceivable that a SLAMRAAM could fire from a moving combat vehicle similar to how a moving Stryker Infantry Carrier Vehicle can now fire Hellfire missiles in the Short-Range Air Defense program (SHORAD).  The program, however, was cut in 2011.

Medium Extended Air Defense (MEADS), a U.S.-German-Italian mobile air defense weapon was developed to NATO standards as a replacement for the Patriot guided missile. While the weapon continued in Europe it was not continued by the Army. Also on the air defense front, another program cited by Rasch was called the JLENS, for Joint Land Attack Cruise Missile Defense Elevated Netted Sensor System. JLENS was a large tethered balloon developed to track approaching over-the-horizon missiles with aerial sensors. Much like the others, the innovations and the program itself showed great promise, yet it was also cut.  Rasch was careful not to necessarily blame previous Army decision-makers by explaining that budget constraints during the war on terror and counterinsurgency efforts in Iraq and Afghanistan interfered with these other air-defense acquisition programs.

“We were caught up in the COIN (Counterinsurgency) fight. During the prioritization phase of spinning up the procurement dollars, those programs did not warrant above the cut line. We would take them today if we had them,” Rasch said.

This history and the notable absence of a good short-range air defense system of course provided much of the inspiration for the now emerging SHORAD program arming Stryker vehicles with missiles, lasers and even recoverable air-defense drones.

Rasch praised the investments made and resulting innovations made possible by these previous weapons development efforts, adding that the Army’s current posture is quite different in that it closely aligns acquisition and production with RDT&E dollars.

“What you see now if you look at the budget is a different message. The Army is not only doing the RDT&E upfront but you see the procurement tail at the front end,” Rasch said.

Lending evidence to his comment about current Army modernization efforts, Rasch cited the success of the Army’s now operational truck-mounted High Energy Laser program and base-protection Indirect Fire Protection Capability which uses sensors and interceptors to protect operating bases from cruise missile and other attacks. Both of these programs successfully transitioned from the world of S&T to the warzone supporting soldiers.

“The Army has made a commitment and we will get some of this capability. And if it proves out in the prototyping, we will buy more.” Rasch said.