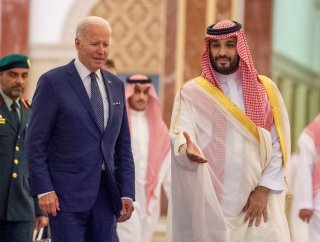 Cancel culture is nothing new. Four centuries ago, the Roman Catholic Church twice sought to cancel Galileo for the heresy of believing the earth rotated around the sun. The church insisted that the earth was the center of the universe. Back then, social media was a tautology, and Twitter was something that birds did on trees.

Today, cancel culture is much more pervasive but equally regressive. Its impact is particularly pronounced in the United States and liberal-leaning democratic societies. Academic and corporate institutions have ossified into havens of ideological conformity where deplatforming—denying someone the right to engage in public discourse—is commonplace and healthy differences descend into irreconcilable conflicts.

However, what is new is the invasion of cancel culture into relations among nations that have long been based on national interests. A recent glaring example, of course, is Joe Biden’s campaign declaration labeling Saudi Arabia a “pariah.” What could have been written off as a campaign faux pas became national policy after the president’s inauguration. That policy quickly devolved into an embarrassing albatross when oil prices shot up and supply tightened after Moscow’s invasion of Ukraine led to a boycott of Russian oil. President Biden was forced to make a pilgrimage to Saudi Arabia, meet with Saudi leadership, and ask for increased Saudi oil production. You can’t banish nations as pariahs, let alone the world’s largest exporter of oil—a nation whose interests remain largely aligned with those of the United States.

However sincere the “pariah” pledge by candidate Biden, it reflects the danger of allowing cancel culture—and the cheap political gains politicians mistakenly believe it brings—to drive foreign policy. It is a form of un-realpolitik in a nation already suffering the decline of civic organizations, hyperpartisan public discourse, and the death of public trust. Cancel culture’s encroachment into U.S. foreign policy doesn’t benefit American strategic interests or global standing but rather undermines U.S. leadership.

Cancel culture is the process of shutting up by shutting out. It is the politics of smoke and mirrors where synthetic activism masquerades as ideological purity. Cancel culture is a species of idealism that, paradoxically, runs contrary to the ideals that made the United States a great nation at home and the most powerful nation abroad. In the most profoundly un-American way, cancel culture stands for punishment and vengeance over forgiveness and tolerance; conformity over pluralism; deplatforming over debate; feelings over facts; virtue signaling over policy priorities; and public shaming over reasoned persuasion.

Diplomacy, not appeasement, is the antidote to cancel culture. Diplomacy is the political equivalent of listening. If you listen to others who disagree with you with genuine intent to understand their position, you increase your chances of catching errors in their judgment, and by holding up the proverbial mirror, you increase the possibility of detecting errors in your own thinking. The same is true for nations writ large. Diplomacy is a perpetual motion machine in transit between two poles: the core value of open dialogue and the limitations of state interest, without which constructive discourse is impossible.

A core tenet of multilateralism is that states have the right not to be dominated. This means no single nation should control the collective conversation or set the global standard for acceptable behavior. It also means that precluding specific topics or—more perniciously—certain nations from the discussion are forms of domination that taint diplomacy. Diplomacy is not just another freedom or right. It is the mechanism by which we generate the conceptions and policy decisions that allow nations to organize their experience in the world. It is the mechanism that allows us to reformulate and criticize those conceptions when they become anachronistic and sterile.

American and Saudi values aren’t identical—no two nations’ values are. But their interests transcend the oil-for-security paradigm that has animated bilateral ties for over eighty years. Today, the kingdom is going through one of the region’s most ambitious socio-economic reform projects, Vision 2030. This transformation offers tangible opportunities for win-win cooperation between Riyadh and Washington. Biden's latest visit yielded new cooperation on 5G networks, cybersecurity, space exploration, public health, entertainment, and sports. As a Saudi educated in the United States, this fills me with pride and optimism for a new era of cooperation where strategic interests overcome virtue signaling.

Interests, not values, are the currency of world politics—cancel culture undermines both. If deplatforming an individual or segment of society is reprehensible, then attempting to deplatform one of the most important nations in the Middle East is myopic at best. This is a call for the active revival of diplomacy: the revival of a framework grounded in reality, rooted in concrete interests, and erected upon a foundation strong enough to withstand increasingly rapid changes in global affairs. For such a revival to occur, nation states cannot afford to shy away from the hard questions.

If global superpowers with the ability to dominate the collective conversation are so concerned with the well-being of less fortunate states, why is their geopolitical sway waning? Why do nations who fall for the cancel culture zeitgeist end up hastening their loss of influence, canceling themselves in the process? There isn’t a one-size-fits-all answer to these questions, but one thing is certain: if cancel culture is free to act as the judge, jury, and executioner, strategic interests will get summary justice.

Sultan Althari is an advisor, best-selling author, and columnist for Al Arabiyya English.