Can't Get an F-35? Russia Wants to Sell Its Fifth-Generation Su-57 Stealth Fighter 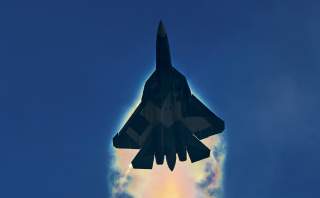 Key point: This would be easy cash for Russia's struggling economy.

With the first serially produced Su-57 fifth-generation fighter set to enter service in the Russian Air Force later this year, the Russian defense industry is planning to unveil the export version of the Su-57 at the upcoming MAKS 2019 international air show.

Russian state news outlet TASS reports that Rosoboronexport-- Russia’s state arms export agency-- will be displaying the Su-57E, as the fighter will be called, alongside the Il-112VE light military transport aircraft: "The Su-57E fighter (the Gagarin Aircraft Plant in Komsomolsk-on-Amur) and the Il-112VE military transport plane (the Voronezh Aircraft Enterprise) will be the main exhibits of the Russian exposition’s military segment at the MAKS-2019 air show,” according to a Rosoboronexport statement.

TASS, citing Rosoboronexport, goes on to describe the Su-57E as superior to “generation 4++” fighters like the Su-35S in that the former boasts “multi-functionality, automation and the high degree of intellectualization of combat employment processes, super-maneuverability and other characteristics.” This is a rather standard list of fifth-generation features that have come to be associated with the Su-57; the more pressing question is how the Su-57E fares against its domestic Su-57 counterpart. Concrete specifications details will remain scant until the Su-57E is formally unveiled later this month, though the export version is not expected to deviate significantly from the established Su-57 design.

Rostec executive Viktor Kladov previously suggested that the Su-57E, which was cleared for export in March 2019, could be unveiled at the Dubai Airshow in November of this year. The MAKS air show has long been Russia’s preferred medium for flagship military aircraft presentations; an early development version of Su-57 flew for the first time at MAKS 2011.

The export version of the Su-57 was previously known as the Fifth-Generation Fighter Aircraft (FGFA), a joint Russian-Indian development project initiated in 2007. New Delhi withdrew from the FGFA program in 2018 amid a flurry speculation that the Su-57 was dead on arrival. It is now apparent that reports of the Su-57’s demise have been greatly exaggerated, with Russia planning to ship 76 serial units over the next decade. What is less clear is how the FGFA project has evolved in India’s absence, and whether or not it can be considered as a direct technical precursor to the upcoming Su-57E.

While the specifications nature of the Su-57E remains shrouded in mystery, Moscow’s Su-57 export ambitions have been well-documented over the years. Rosoboronexport is primarily targeting the usual list of international arms import power players: India, China, and-- more recently-- Turkey. By the same token, Moscow believes that the Su-57E will appeal as a high-end air superiority solution to a broader secondary audience.

"We believe that the Middle East is an attractive market for this aircraft," said Kladov at the 2019 LIMA exhibition in Langkawi. Russian defense commentary previously identified Egypt and Algeria as prospective customers.

No less remarkably, the Vietnamese Air Force expressed interest in importing the Su-57 earlier this year. But with an estimated total export cost of around $100 million per unit, it remains to be seen how the Su-57E will manage to penetrate mid-tier markets that prioritize raw cost-to-performance value over the latest avionics and aeronautics design features.

Mark Episkopos is a frequent contributor to The National Interest and serves as research assistant at the Center for the National Interest. Mark is also a PhD student in History at American University. This article first appeared last month.