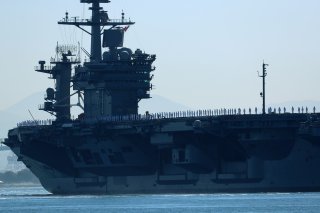 This week Captain Brett Crozier, commanding officer of the USS Theodore Roosevelt, has reportedly warned his superiors of the dire consequences his ship faces if the majority of the crew is not taken off the nuclear-powered aircraft carrier and isolated. The unusual plea was made as more than 100 sailors were reportedly infected with COVID-19 as of Monday.

In the letter, which was first published by The San Francisco Chronicle, Crozier wrote, "This will require a political solution but it is the right thing to do. We are not at war. Sailors do not need to die. If we do not act now, we are failing to properly take care of our most trusted asset – our Sailors."

The four-page letter also said that only a small contingent of the infected sailors have been off-boarded, and most of the crew remains aboard the carrier, which had been operating in the Philippine Sea. It had recently visited Vietnam – becoming only the second U.S. carrier to make a port of call there since the fall of Saigon in 1975.

Last week the ship pulled into Guam after 23 sailors had tested positive for the coronavirus. That marked the first time that infections had been detected aboard any U.S. Navy ship at sea. The entire crew has been tested for COVID-19.

It is necessary to isolate those who have contracted the disease, something that is extremely difficult to do in the confines of a naval warship.

Crozier has called for the majority of the personnel to be removed from the ship and then conduct a complete disinfecting of the ship. That would require offloading all but 10 percent of the crew, who would be required to stay aboard to run the ship's nuclear reactor, sanitize it and keep it secure while also being able to respond to any emergencies.

Navy officials have reportedly responded with a statement, which TheHill.com published on Tuesday afternoon: "The ship's commanding officer advocated for housing more members of the crew in facilities that allow for better isolation. Navy leadership is moving quickly to take all necessary measures to ensure the health and safety of the crew of USS Theodore Roosevelt, and is pursuing options to address the concerns raised by the commanding officer."

"I heard about the letter from Capt. Crozier (Tuesday) morning, I know that our command organization has been aware of this for about 24 hours and we have been working actually the last seven days to move those sailors off the ship and get them into accommodations in Guam. The problem is that Guam doesn't have enough beds right now and we're having to talk to the government there to see if we can get some hotel space, create tent-type facilities," Modly was quoted as telling the cable news channel.

He added, "We don't disagree with the (captain) on that ship and we’re doing it in a very methodical way because it’s not the same as a cruise ship, that ship has armaments on it, it has aircraft on it, we have to be able to fight fires if there are fires on board the ship, we have to run a nuclear power plant, so there's a lot of things that we have to do on that ship that make it a little bit different and unique but we’re managing it and we’re working through it."

The outbreak on the USS Theodore Roosevelt is not the only cases of COVID-19 the service is addressing. On Monday it was reported that a Navy recruit became the first confirmed case of the coronavirus at the service's Recruit Training Command in Great Lakes, Illinois. That individual has been moved into isolation and is receiving care at the Captain James A. Lovell Federal Health Care Center.