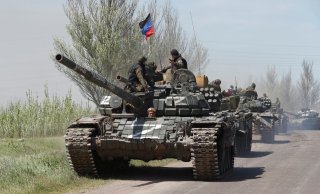 A British citizen sentenced to death by a pro-Russian separatist court has appealed the verdict, according to a local official.

"Today the lawyer of convicted Aslin Aiden filed an appeal to the Appeals Chamber of the Supreme Court with a request to change the sentence," reported Russian state news outlet TASS, citing a local “court source.”

Aslin, twenty-eight, was identified by U.K. lawmaker Robert Jenrick as a British-Ukrainian national who volunteered to fight for Ukraine. Aslin “joined the Ukrainian armed forces in the normal way before Putin’s illegal invasion, and has been serving in the armed forces,” Jenrick told the Washington Post. Jenrick denounced the court process leading to Aslin’s conviction as a “disgusting Soviet-era style show trial,” adding that he hopes the Kremlin will agree to a prisoner exchange. “The Russian authorities have chosen to make an example out of these two British nationals, and it is, I think, completely shameful,” Jenrick said.

Aslin was sentenced to death together with British national Shaun Pinner and Moroccan citizen Brahim Saadoun, whose lawyers say they also filed appeals. According to Russian state news, the court said the appeals would receive consideration within two months. "Undoubtedly, if the appeal is dismissed and the sentence comes into force, a request for clemency will be filed as this is an inherent right of the defendants, under the legislation of the Donetsk People's Republic," said Pinner’s lawyer, Yulia Tserkovnikova.

The Russian Federation placed a moratorium on executions and death sentences in 1996. However, the death penalty is legal in the Ukrainian separatist Donetsk People’s Republic (DPR), which Russia recognized as a sovereign state days before its February 24 invasion of Ukraine.

The European Court of Human Rights (ECHR) issued an order last month calling on Russia to ensure that the two captured Britons are not executed. Kremlin spokesman Dmitry Peskov said Moscow “has no right to interfere” in the court decisions of the Donetsk separatist government when asked about the death sentences in late June, with Moscow reportedly urging London to take the matter up with the DPR. Britain has so far declined to negotiate directly with DPR officials. "We condemn the exploitation of prisoners of war for political purposes and have raised this with Russia. We are in constant contact with the Government of Ukraine on their cases and are fully supportive of Ukraine in its efforts to get them released,” a British Foreign Office spokesperson said, according to Reuters.

"The bottom line is Aiden has said the DPR has told him nobody from the UK has made contact, and that he will be executed," said Aslin’s grandmother, Pamela Hall, according to the BBC. "I have to believe what Aiden has said to us, that if the DPR don't get some response then they will execute him. Obviously, I hope that isn't true," Hall added.