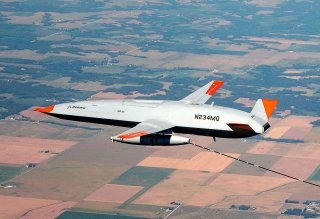 The emerging MQ-25 Stingray carrier-launched drone is expected to nearly double the attack range of key ship-launched strike assets such as the F-35B and F-35C Joint Strike Fighters and F/A-18 Super Hornet.

The MQ-25 will be the first unmanned platform to launch and land on an aircraft carrier, allowing fighter jets to refuel in flight as they transit from carriers and amphibious ships to target areas ashore. For instance, if an F-35 stealth fighter can operate with a combat radius of roughly 300-to-500 miles, what if a survivable refueler could enable the fifth-generation aircraft to reach twice as far or spend twice as much “dwell time” above target areas?

This is the premise and promise of the MQ-25, which Chief of Naval Operations Adm. Michael Gilday recently revealed is now being fully integrated into the Navy’s carrier air wing. Gilday explained that the Navy is “maximizing domestic production lines” for the MQ-25, which will increase strike fighters’ range and mission scope by offering additional refueling options. Initial operating capability for the MQ-25 in the carrier air wing is expected in 2025.

By doubling the attack range of the U.S. Navy’s fighter jets, the service is able to project power across a larger threat envelope while also remaining outside the strike range of modern anti-ship missiles. For example, although the Navy has emphasized that it has the necessary layered defense technologies to operate wherever it needs to, concerns remain that China’s 1,000-mile-range “carrier-killer” missiles could pose a serious threat to its strike groups. And while it is unclear where these Chinese weapons are able to hit moving targets with a high degree of accuracy, the ability to attack from much greater stand-off ranges clearly multiplies the tactical options available to commanders.

The Stingray’s stealth configuration brings yet another advantage to high-threat maritime warfare. With a blended and rounded wing-body fuselage configuration and horizontal shape absent protruding vertical structures, the MQ-25 will certainly be less vulnerable to detection by enemy radar. This not only means that it can reach at-sea locations that are much less accessible to land-launched refuelers, but it is also much more survivable than larger, fixed-wing tanker aircraft which will be juicy targets for enemy anti-aircraft capabilities.