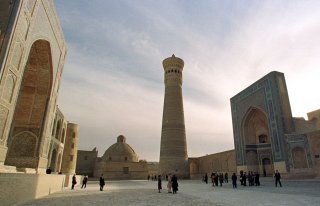 For a long time, Central Asia has been understood through the lenses of the “great game” and “great power politics.” With the shift in U.S. strategic interests from counterterrorism to great power competition, analysts believe that Central Asia will turn into a zone where the three major powers—the United States, China, and Russia—will find themselves with increasingly conflicting geopolitical interests. While all three are united today for a more stable Central Asia protected from radicalism, the divergence comes as each wants to supplant the others as a primary partner of the region.

Even after more than three decades of independence, the Central Asian states have had a hard time reducing their dependency on Russia. There have been shifts in certain areas—trade relations, for instance, with China gradually replacing Russia as a primary trading partner. In terms of security, as the recent Russian intervention in Kazakhstan showed, Russia has remained the region’s primary security guarantor. However, the Russian invasion of Ukraine, which revealed Moscow’s military shortcomings, presents a new opportunity for Central Asian regionalism.

Lack of Regionalism from Within

Understandably, Central Asia adopted a multi-vector foreign policy. However, given the weakness of these countries compared to Russia and China, and the lack of a coordinated regional stance, they have been tied to the regional security architecture created by Moscow and Beijing. Three Central Asian countries—Tajikistan, Kyrgyzstan, and Kazakhstan—are members of the Collective Security Treaty Organization (CSTO). Similarly, except for Turkmenistan, the rest of the Central Asian states are members of the Commonwealth of Independent States (CIS) and the Shanghai Cooperation Organization (SCO).

Russia has obstructed any sort of initiative by Central Asian nations toward fostering regionalism. Instead, it has highlighted Russia-led and Russia-owned processes such as CSTO or CIS. For instance, Russian president Vladimir Putin once said that the threat emerging from Afghanistan “can only be overcome by a global effort with reliance on the United Nations and regional organizations—the Collective Security Treaty Organization, the Shanghai Cooperation Organization, and the CIS.” As a result, Central Asia could not move toward a form of regionalism from within.

The CSTO was created to defend member states against a conventional military invasion but it has remained irrelevant to Central Asian security. The Central Asian countries have disputes over resources and borders with each other, and, while some of them remained unresolved and have even led to state-level military confrontation, the CSTO has not presented solutions for them. Moreover, Russia’s lack of success in its war in Ukraine should make Central Asia think twice before relying on Moscow for security.

If there is any major external threat to the sovereignty of the small Central Asian states, it would be the competing desire of major powers in the region—Russia and China—to increase their leverage. Most Central Asian countries consider the Russian invasion of Ukraine as a violation of Ukrainian sovereignty and have withheld cooperation with Moscow in the conflict. Unlike the Afghanistan occupation in the late 1970s, when Moscow was able to mobilize support from most of the Warsaw Pact countries, the CSTO members have refused to endorse Moscow’s stance in the current conflict. Given the presence of Russian speaking peoples in Central Asia and irredentist policy in Moscow, a Russian victory in Ukraine will present a real threat to these countries’ sovereignty.

The Need for Regionalism

On a practical note, as Jennifer Murtazashivili noted, with the withdrawal of Americans from Afghanistan and the bloody engagement of Russians in Ukraine, China may find “a greater incentive to become more involved in security matters in the region in ways they had not been in the past.” Without a clear collective vision, there is a risk that Central Asia will face strategic uncertainty or that it will gradually fall into the exclusive domain of one of the other great powers. As Russia has done in the past, China will dominate a less integrated Central Asia by dealing with each country separately. The region is also surrounded by a range of regional powers that follow an ideological policy, such as Turkey (Neo-Ottomanist ideals and pan-Turkism) or Iran (Shia centric policy).

An exclusive security dependency on the revisionist great powers is what the Central Asians should avoid. The shortcomings of Russian military power in Ukraine provide a new opportunity for Central Asians to rethink regionalism and collaboration to ensure a safe and free Central Asia. Regionalism as coordination will also prevent "divide and conquer" tactics by Russia and China.

A Path Towards Regionalism

Given the mentioned scenario, it is time for the Central Asians to take practical steps toward the formation of a security community. A security community, according to Emanuel Adler and Michael Barnett, is a group of states, a community, which has mutual trust and forms a collective identity.

In order to form a security community, the following steps are required:

First and foremost, it is important that the region develop a shared identity and values. Currently, there is a multiplicity of terms and jargon to identify the region. For instance, on the one hand, the term “central-Eurasia” is defined by the Russian orientation for which Russian right-wing intellectuals, such as Alexander Dugin, have been the main exponent. On the other hand, the term Greater Central Asia was coined by Frederick Starr to drag and draw the region as a cultural zone which cuts across the existing state boundaries. For instance, he considers China’s Xinjiang province, Russia’s Tatarstan, and the Northern part of the sub-continent as integral parts of the region. Practically, a narrowly defined Central Asia would include the five “stans.” Afghanistan is also a part of Central Asia but the Taliban-occupied Afghanistan is not conducive to regionalism.

The existence of a precipitating condition, such as a common threat, is the second requirement for the formation of a security community. To unify these countries towards the formation of a community, a common security threat would be great power rivalry in the region. Russia’s irredentist policy and the Islamic radicalism driven by groups like the Taliban, Daesh and other regional terrorist outfits are the other unifying factors.

The final requirement for the security community is the formation of an organization to function as a mechanism to foster interaction among the members. Thus, Central Asians should move forward and restore the idea of a Central Asian regional organization. This will allow interaction and social learning amongst all the countries. A multi-vector policy will be effective once the Central Asian countries are tied together in a self-generated regional organization. To better operationalize the multi-vector policy, Central Asians can adopt the omni-enmeshment approach followed by the Southeast Asian states. Elsewhere I have suggested the same policy for Afghanistan. While at the individual level, Southeast Asian countries have established multiple strategic partnerships, at the regional level they have also tied themselves to the great powers through the Association of Southeast Asian Nations (ASEAN) regional forum (East Asia Summit), ASEAN Plus Three (APT) and dialogue partners. Central Asia could follow the same path. A Central Asian community “Plus Three” could include the three great powers, namely, the United States, Russia, and China. A Central Asian Regional Forum may include the mentioned countries plus three Caucuses states, as well as Iran, Turkey, Pakistan and India.

Such a framework will not only increase the cost of any potential external military intervention, but it will also allow Central Asia to build a united policy towards many issues including an increasing terrorist threat from Taliban-occupied Afghanistan.

With the U.S. withdrawal from Afghanistan, there is little chance the United States would engage Central Asia as a primary security partner through an exclusive strategic partnership. The United States also does not have a primary security or economic interest in the region. Every regional state’s desire to attract U.S. attention during the ongoing turmoil in Europe will not give fruit, much as it has not in the past.

Currently, the Biden administration has framed the conflict in Ukraine as democracies versus autocracies. But this framing does not enable an alliance between Central Asians and the West. As autocracies, Central Asian autocrats will not ally with the United States if the framework remains Washington’s guiding principle. A better alternative would be the protection of a rule-based order versus anarchy.

A better integrated Central Asia can best deal with great power politics and growing instability from Afghanistan. The region can only overcome these challenges through fostering regionalism, collaborating and creating a security community.