Can Central Asia Overcome Its Biggest Challenge in Thirty Years? 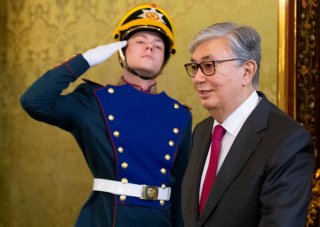 Central Asia is usually considered to be on the periphery of global politics. In recent decades, developments in Afghanistan notwithstanding, the region’s internal activities have not been covered by international media and do not receive much attention. However, two major events have changed that, bringing renewed importance to understanding Central Asia.

First, the announcement of Russia’s draft agreement on “Measures to Ensure the Security of the Russian Federation and Member States of the North Atlantic Treaty Organization” has been mainly discussed from the perspective of the rising Western-Russian confrontation. Major analytical focus has been given to the situation in Eastern Europe, especially in Ukraine. However, most of this discourse has ignored the role of Central Asia in the ongoing disputes between Russia, the United States, and NATO member-states.

Notably, the Russian proposal declares “member States of the North Atlantic Treaty Organization shall not conduct any military activity on the territory of Ukraine as well as other States in the Eastern Europe, in the South Caucasus and in Central Asia.” Furthermore, a separate draft treaty between the United States and the Russian Federation on security guarantees requires Washington not to “establish military bases in the territory of the States of the former Union of Soviet Socialist Republics that are not members of the North Atlantic Treaty Organization, use their infrastructure for any military activities or develop bilateral military cooperation with them.” Strangely, none of the Central Asian countries expressed an official position to these documents and planned negotiations to discuss them.

In other words, Russia is demanding that the West proclaim the whole post-Soviet space, including Central Asia, as Moscow’s exclusive sphere of influence. The level of the rivalry between Russia and the “collective West” has been considerably increasing in the last decade, with negative impacts across Central Asia. For years, the region’s countries have benefitted from balancing East and West through multi-vector foreign policies. However, the current escalation of tensions between Russia and the West will have considerable regional implications. Overcoming this crisis’ consequences depends on Central Asia’s readiness for regional coordination and mutual support in resisting any attempts to limit its sovereignty.

Second, the unexpected instability in Kazakhstan has tarnished its façade of being a prosperous country and the region’s traditional “leader”—due to the size of its economy, GDP per capita, and rich natural resources. The current situation demonstrates that regional political institutions remain weak despite crossing the milestone of being independent for thirty years; they have not evolved into efficient and professional establishments capable of preventing and responding to such crises. For example, Kazakhstan’s national parliament, like other artificially sustained institutions, has not expressed any official position towards the emergency situation despite it proclaiming to represent the people’s interests.

The absence of clear and established mechanisms of power transition, permanent intra-elite rivalries, widespread corruption, nepotism, and lack of accountability triggered popular unrest in the west of Kazakhstan and quickly dispersed to other provinces of the country. If the mass protests of the previous years were quickly suppressed, this time the government reacted slowly and could not initially mitigate them. However, the peaceful protests were quickly captured by criminals, looters, and radical groups for their own purposes. As a result, the national police and armed forces demonstrated their complete unpreparedness by retreating rather than resisting the attacks of several thousand violent marauders. The government’s failure to provide security and safety to its citizens has led to anarchy and pogroms in Almaty, Kazakhstan’s largest city. Thus, President Kassym-Jomart Tokayev appealed to the Collective Security Treaty Organization (CSTO) “to provide Kazakhstan with assistance in overcoming this terrorist threat.” The request has been approved shortly and the CSTO forces deployed to Kazakhstan

These two events have significant implications for Central Asia.

First, Central Asia is facing the biggest challenge to its sustainable development and sovereignty in thirty years. Disregard for Central Asian sovereignty in the planned Russia-NATO negotiations and usage of foreign armed forces in resolving the region’s internal crisis pose direct risks to Central Asian independence. Silent acceptance that Central Asia belongs within a single state’s sphere of influence and efforts to turn the region into a geopolitical object for great powers to play with will not support the region’s resilience and growth.

Second, unfortunately, the situation in Kazakhstan distinctly displayed the inability of political institutions to deal with internal crises. The lack of independent analysis and attention paid to the country’s worsening socio-economic problems and popular discontent, unclear duality in decision-making power between the former and current presidents, protracted power transition together with internal tensions, and poor coordination and demoralization of law enforcement led to the collapse of the state system in cities like Almaty. Institutions afflicted by nepotism and corruption could not resist internal and external shocks or marshal a coordinated and effective response to them.

Third, Central Asia is facing a new era of regional turbulence following a period of regional rapprochement and improved relations. Regime change in Kyrgyzstan at the end of 2020, the ongoing instability in Afghanistan after the Taliban’s August 2021 takeover, the tensions in Tajikistan's eastern Gorno-Badakhshan autonomous region, and spring 2021 border conflict between Tajikistan and Kyrgyzstan bring strategic uncertainty to Central Asia’s future development. Uzbekistan, based on its current reform agenda, and Turkmenistan, due to its complete isolation, remain the only relatively stable regional countries. However, living in such a volatile neighborhood and facing an array of their own internal difficulties, their security can be also challenged. Underdeveloped economies, widespread poverty and unemployment, poor education systems, existing governance issues, and rising religious radicalization have been creating new challenges for the region’s stability and resilience.

Advancing intraregional cooperation without the involvement of external actors could serve Central Asia’s unification and integrity. Considering the region’s common history, culture, and identity there is substantial potential for the advancement of regional partnership. Creating new regional mechanisms and developing connectivity, trade, and humanitarian relations would greatly benefit Central Asia; a united region would have a more powerful voice, capacity, and subjectivity in dealing with both intraregional and external issues. On the contrary, a divided region torn apart by internal problems can be easily manipulated and exploited by external players.

Furthermore, considering Central Asia’s traditionally very close relations with Russia and China, who are its direct neighbors, and the will to maintain beneficial ties with the United States, European Union, Turkey, and other important regional countries, the Central Asian states should seek to avoid becoming involved in international rivalries. Declaring its neutrality and non-alignment while keeping balanced relations with all important external powers would provide the Central Asian countries independence and freedom in conducting foreign policies. At the same time, such a transparent position would exclude Central Asian countries from joining any military-political organizations led by external actors. It is in the interest of all Central Asian countries to commit not to join military alliances and not to allow their territory to be used for attacks against any extra-regional country.

Lastly, regional countries should establish effective and stable political institutions. It does not mean that they have to follow the approach to liberalization and democratization that has found success in the rest of the world. The region may have its local specifics and mechanisms informing governance systems. However, tackling corruption and nepotism; building merit-based bureaucracies; developing a fair, just, and respectful approach to the dignity, interests, and freedoms of the citizens; and increasing accountability should be the universal priorities of regional states. Without deep institutional reforms, economic transformation, investments into the development of human capital, considerable improvement of education, and improved political transparency, Central Asia may face a gloomy future. Conversely, implementation of these reforms could bring the region peace, independence, resilience, and prosperity.

Akram Umarov is a Fulbright Visiting Scholar at the Center for Governance and Market at the University of Pittsburgh.