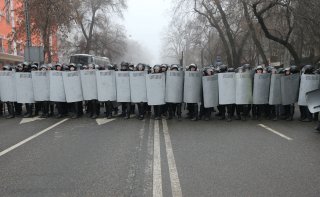 Protests continued in Kazakhstan on Thursday as Russian paratroopers arrived in the country following the embattled government’s request for the Collective Security Treaty Organization (CSTO) to intervene.

Dozens of demonstrators and eighteen members of the security forces have been killed in clashes during the unrest, according to the Kazakh government. More than 2,000 Kazakh civilians have been arrested for participating in the violence, which has also resulted in the storming and near-destruction of several government buildings in Almaty, the country’s largest city.

With the aid of Russian troops, the government was able to re-establish order in the country’s airport after protesters briefly occupied part of it and reportedly seized five planes. Clashes between police and violent demonstrators continued in Almaty’s main square, an area that has reportedly served as a focal point for anti-government activity over the past week. Internet service across the country was also suspended earlier in the week, restricting Kazakhs’ access to social media and making it difficult to determine how widespread the protests were.

Russia’s intervention in Kazakhstan was requested by the government in Nur-Sultan in an attempt to put down the worst outbreak of violence in the country since the fall of the Soviet Union. Stability in Kazakhstan has clear benefits for Russia. As a major Central Asian nation and a key supplier of oil, gas, and uranium, unrest in Kazakhstan has the potential to spread.

Kazakh President Kassym-Jomart Tokayev welcomed the arrival of Russian and other CSTO forces, claiming that they had come to fight against “terrorist groups” who were trained in foreign countries, although the latter claim has come under scrutiny in the West. The Kremlin also referred to its mission as a “counter-terrorist operation” and echoed Tokayev’s claim that the uprising had foreign backing. It is unclear how many Russian troops are present in Kazakhstan.

Protests began after a New Year’s Day hike in the price of liquefied petroleum gas, or LPG, a propane-butane gas widely used in the country. After the government eliminated a long-standing subsidy on the gas, the price doubled, leading to street protests that quickly escalated into riots and anti-government demonstrations. After partially reinstituting the price cap failed to restore order, Tokayev announced a series of government reforms including the dismissal of his cabinet. Nursultan Nazarbayev, the country’s previous president and Tokayev’s mentor, was also forced into retirement on Wednesday after Tokayev dismissed him from the country’s powerful Security Council.

The United States has avoided taking a position on the Kazakh protests. Secretary of State Antony Blinken recently spoke with Kazakh Foreign Minister Mukhtar Tileuberdi and “reiterated the United States’ full support for Kazakhstan’s constitutional institutions” and called for a “peaceful, rights-respecting resolution to the crisis.”