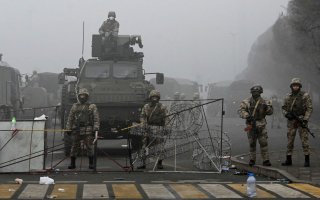 The protests, which began over the elimination of a key state subsidy, have dramatically escalated since the beginning of the year. On Wednesday, protesters broke through security cordons and stormed several government buildings, including the mayor’s office and presidential residence in Astana, Kazakhstan’s largest city.

Tokayev described the incidents as a “terrorist threat” in an address on state television on Thursday, in which he requested that CSTO forces enter the country to assist Kazakh security forces in restoring order.

“In fact, this is no longer a threat,” he clarified. “It is undermining the integrity of the state.”

In his address, Tokayev implied that the protesters were foreign agents who had “received extensive training abroad,” and said that in addition to storming government buildings, they had also seized “premises where small arms are located,” warning of the potential for an armed insurrection.

Nikol Pashinyan, the Prime Minister of Armenia and current chairman of the CSTO’s Collective Security Council, acceded to Tokayev’s request later in the day.

“In view of the threat to the national security and sovereignty of the Republic of Kazakhstan caused, inter alia, by outside interference, the CSTO Collective Security Council [...] decided to send the CSTO Collective Peacekeeping Forces to the Republic of Kazakhstan for a limited period of time with a view to stabilizing and normalizing the situation,” the Armenian leader announced on Facebook.

Protests in Kazakhstan began after an increase in the price of liquefied petroleum gas (LPG), a propane- and butane-based fuel widely used in the country and subsidized by the government. On New Year’s Day, the subsidies were lifted after Tokayev announced that the government could no longer afford them, doubling the price overnight and directly leading to unrest.

Tokayev’s initial response to the unrest included both a partial restoration of the price cap and punitive measures, including a two-week curfew and travel restrictions across the country. The country’s internet had also reportedly been shut down, although Russian news agency TASS reported that it had been restored on Thursday.

In addition to the twelve reported deaths, the Kazakh Ministry of Internal Affairs indicated that more than three hundred police officers and members of the national guard had been injured during the unrest. It did not estimate deaths or injuries among civilian protesters.

The protests’ intensity and rapid spread suggest a wider vein of discontent among Kazakhs, many of whom remain in poverty despite Kazakhstan’s immense oil wealth. The country has been a de facto one-party state since the fall of the Soviet Union; its Soviet-era leader, Nur-Sultan Nazarbayev, retained power for three decades after its independence until his retirement in 2019.

Even after his official retirement, Nazarbayev continued to serve as chairman of the country’s Security Council until his resignation, along with Prime Minister Aksar Mamin and other high-level officials, on Wednesday.