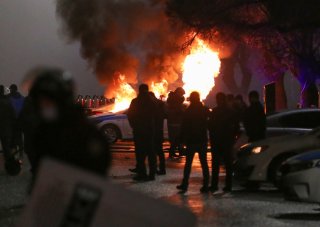 The government of Kazakhstan declared a two-week state of emergency in Almaty, the country’s largest city, after protests over the price of gasoline turned violent.

The decree, which went into effect on Wednesday, includes an 11:00 pm to 7:00 am curfew, a ban on mass gatherings, and travel restrictions, according to the office of President Kassym-Jomart Tokayev.

Earlier in the day, Tokayev had responded to the protests in a televised address, condemning “calls to attack government and military offices” but insisting that it wanted “mutual trust and dialogue rather than conflict.”

During his address, police outside the mayor’s office used stun grenades and tear gas to restrain a protest, according to Reuters. The following day, protesters in the same location reportedly breached the building after several members of the security forces declined to stop them.

The protests come after the Kazakh government lifted caps on the price of “liquefied petroleum gas” (LPG), a mixture of propane and butane gas with a variety of uses. The gas is ubiquitous in Kazakhstan, in part due to the previous government-instituted price cap; many Kazakhs have modified their cars to run on it rather than petroleum, which is more expensive.

The government lifted the LPG price cap on January 1, arguing that continuing to subsidize it was unsustainable for the country’s energy sector. The announcement effectively doubled the price of the gas overnight, leading to widespread protests, both in Almaty and in the country’s western regions.

Tokayev’s office partially relented on Tuesday, restoring the cap at fifty tenge, or eleven cents, per liter in the country’s southwestern Mangystau province, where the highest concentration of LPG usage is located. It did not indicate the cap would be restored in any other areas.

Footage circulated on social media after the demonstrations in Almaty, showing a series of burned-out police cars and a number of armored vehicles moving through the city’s downtown area. Although the city’s main square was temporarily occupied by demonstrators, they were removed by police using flashbang grenades later in the day. Other explosions were heard throughout the city through the night, according to local sources.

Kazakhstan is a de facto one-party state widely regarded as a dictatorship. Prior to his accession, Tokayev was the protege of long-time Kazakh leader Nursultan Nazarbayev, who ruled the country from before the fall of the Soviet Union until his partial retirement in 2019.

Public protests are illegal in Kazakhstan. A prior protest movement in 2011 led to 14 deaths after security forces cracked down on demonstrations in the western city of Zhanaozen.