After Ukraine, Could Central Asia Be Next? 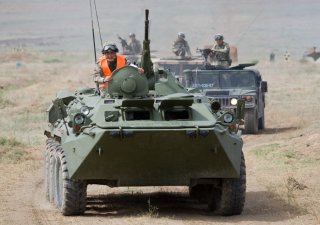 When Ukraine appeared to be on the verge of exiting Russia’s orbit in late 2013, it took an almighty effort from the Kremlin to drag the then Ukrainian president Viktor Yanukovych back from the precipice. Yanukovych was gone within three months, fleeing into exile in Russia as the Euromaidan demonstrations consumed Ukrainian political life. These events sowed a seed in Russian president Vladimir Putin’s mind about the need to act, which found fertile soil in thinking we can trace back to his fear of the color revolutions and his 2007 speech at the Munich Security Conference. The tragic events we are witnessing now, as division after division of Russian troops pile into Eastern Europe, are the direct result of that seed.

The brutal pressure applied to Yanukovych in November 2013 made clear where Putin saw the borders of his privileged sphere of influence, exemplified by his ambitions for the Eurasian Economic Union. The message was simple: if you were within the borders of Imperial Russia or the USSR, or are proximate to modern-day Russia, your sovereignty is an illusion, and you should expect to receive direction from the Kremlin.

Putin has more than once described the breakup of the Soviet Union as “the greatest geopolitical catastrophe of the twentieth century.” It is remarkable that he would pinpoint this moment of liberation as the greatest tragedy of a century that saw two world wars and tens of millions of conflict-related deaths—including 20 million Soviet citizens alone. It also allows us to understand in simple terms the objective that is driving him after more than twenty-two years of holding total domestic power: rebuilding the Russian Empire.

The world’s attention is understandably fixed on Ukraine right now and its remarkable defensive effort, led by a democratic champion in Volodymyr Zelenskyy. But we must also consider the bigger picture. It is not just Ukraine that now finds itself at an existential crossroads vis-à-vis Putin’s Russia.

Central Asia, a vast and frequently misunderstood region stretching from the Caspian Sea to China, was long subjugated by Imperial Russia, and then the Soviet Union. Its largest country, Kazakhstan, only achieved its independence thirty years ago. In its short lifespan as an independent nation, Kazakhstan has navigated a delicate diplomatic tightrope, balancing the interests of a rising China, a revanchist Russia, and a sporadic West. Often described as a “multi-vector approach,” Kazakhstan was remarkably adept at profiting from these multidirectional ties to accelerate its development, and guarantee its own security and sovereignty.

This status quo was violently upended earlier this year when the embattled President Kassym-Jomart Tokayev invited Russian troops into the country to help put down civic protests. In an instant, Putin went from neighbor to privileged partner to holding Kazakhstan’s destiny in his hands. Flailing in the light of mass demonstrations with legitimate grievances, Tokayev issued a shoot-to-kill order that put his own citizens in grave danger, leading to at least 227 recorded deaths on the streets. He ordered the detainment of thousands of peaceful protesters and several high-profile political figures, including former Prime Minister Karim Massimov—seemingly the scapegoat of choice. We have since seen widespread accounts of mistreatment, and the country’s own prosecutor-general recently admitted that at least six detainees have died as a result of torture inflicted in custody.

In Massimov’s case, it is generally agreed that he is being detained and held in isolation as a result of refusing to obey the shoot-to-kill order. Sadly, this modernizing voice known and respected by many in the West is being sacrificed to Tokayev’s power play. The government appears unable to answer questions about, or provide justification for, his arbitrary detention, or that of hundreds of other political prisoners. It is hardly surprising that their actions have drawn the ire of the European Parliament, Human Rights Watch, and many other international bodies. It is for these reasons that I personally have submitted his case to the UN Working Group on Arbitrary Detention for investigation.

While scattered protests persist, there is now a false veneer of stability: order has been restored, and the Russian troops have reportedly come and gone. An international charm offensive has sought to show the government is tackling the root causes of the protests by removing red tape and beefing up employment opportunities for Kazakhstan’s restless youth.

The reality though is that Putin now controls Kazakhstan’s fate. The risk of Russia completing its mission in Ukraine, then turning its attention to its old southern backyard of Central Asia, is brutally painful to contemplate but cannot be ignored. Kazakhstan has already shown it is economically intertwined with Russia’s fate in the face of Western sanctions. Like Ukraine, Putin has stated that Kazakhstan is not a real country, and like Ukraine, Kazakhstan has a Russian ethnic minority near its border with Russia. Why wouldn’t Putin want to formally reclaim the Soviet Union!s rule of this vast, resource-rich neighbor? Why wouldn’t the indebted and weakened Tokayev cede to his demands? And why wouldn’t Putin also then turn his sights on Kyrgyzstan, Tajikistan, Turkmenistan, and Uzbekistan?

The Eurasian Economic Union was meant to be Russia’s answer to the European Union. But in its current form, it has not proven anywhere near powerful enough to match Putin’s ambitions. Ukraine and Russia’s western flank is the first step of an attempt to restore a Russian Empire. Kazakhstan and its Central Asian neighbors look set to come next.

David A. Merkel is an Associate Fellow at the International Institute for Strategic Studies, former Deputy Assistant Secretary of State, and former Director of South and Central Asian Affairs for the U.S. National Security Council. He is a founding pro bono trustee of Nazarbayev University in Kazakhstan.