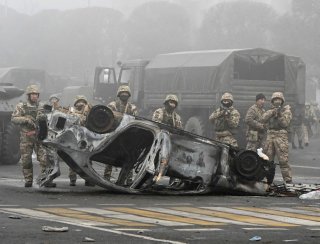 With the aid of Russian troops and orders to “shoot to kill,” Kazakhstan’s security forces appear to have retaken full control of Almaty, Kazakhstan’s largest city, days after violent riots and large-scale property destruction.

The relative peace in Almaty follows the deployment of Russian troops into Kazakhstan, a deployment brought about by President Kassym-Jomart Tokayev after his government initially wavered in confronting the violent demonstrations. To remove ambiguity, the president ordered troops to “shoot to kill” in advance of their occupation of, and patrols through, Almaty.

Gunfire can still be heard in the city’s periphery, according to residents, but the central areas, which served as the site of repeated protests and riots, appeared to be fully under government control for the first time since the beginning of the crisis.

In spite of his success, Tokayev indicated on Friday that the crisis was not yet over, accusing foreign terrorists of participating in the unrest. The Kazakh president claimed that the protesters had “not laid down their arms, [but] continue to commit crimes or are preparing for them.”

“Whoever does not surrender will be destroyed,” the president insisted, claiming that he had given a “shoot to kill” order to all members of his security forces.

The country’s demonstrations, which were initially triggered by the government’s removal of a popular subsidy on fuel gas, led to the worst episode of violence in Kazakhstan since the collapse of the Soviet Union in 1991. Dozens of government buildings were stormed, ransacked, or partially destroyed during the violence, and at least eighteen officers of the country’s security forces were killed, as were several dozen protesters. Nearly 4,000 civilians have been arrested for participating in the protests, which were illegal under Kazakh law even before becoming violent.

Indeed, the protests’ duration and vitriolic quality likely stem from other political frustrations, including the influence of Nursultan Nazarbayev, the country’s former president from 1989 to 2019. Although Nazarbayev officially retired in 2019, turning over presidential power to his successor Tokayev, the former leader retained a seat on the country’s Security Council until his dismissal earlier in the week as a concession to the protestors.

Russian troops, which intervened in the country following Kazakhstan’s request for help from the Collective Security Treaty Organization (CSTO) military alliance, continue to arrive at Almaty’s airport. A statement released by the Kremlin claimed that seventy planes were moving Russian troops and equipment into Kazakhstan, some of which were being used to secure the country’s airport, itself the subject of previous clashes between demonstrators and security forces.

Secretary of State Antony Blinken has avoided taking a position on the demonstrations, urging calm and respect for constitutional authority from all sides. However, he has offered criticism of the Russian deployment. “I think one lesson in recent history is that once Russians are in your house, it’s sometimes very difficult to get them to leave,” Blinken wryly observed.