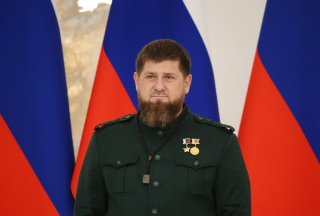 Ramzan Kadyrov, the leader of Russia’s Chechen Republic and a key loyalist of Russian leader Vladimir Putin, condemned the leadership of Russia’s military in an eleven-minute audio clip posted to Telegram on Sunday.

During his remarks—recorded in the aftermath of a decisive Russian defeat following a four-day battle in Ukraine’s northern Kharkiv region—the Chechen strongman blamed Russian officers for the loss and suggested that Putin had not been made fully aware of the situation on the ground in Ukraine.

“They [the Russian leadership] have made mistakes, and I think they will draw the necessary conclusions,” Kadyrov said, according to Russia’s Novaya Gazeta newspaper. “If today or tomorrow no changes in strategy are made, I will be forced to speak with the leaders of the defense ministry and the leadership of the country to explain the real situation on the ground to them.”

“It’s a very interesting situation,” he added. “It’s astounding, I would say.”

Kadyrov, a former member of the Chechen resistance to Russia who switched sides along with his father during the Second Chechen War, has led Chechnya since 2007. His rule in the autonomous republic has been widely criticized abroad for documented human rights abuses against political opponents and members of Chechnya’s LGBT community. Throughout Kadyrov’s fifteen-year tenure, however, he has remained closely aligned with Putin, and following Russia’s invasion of Ukraine in February, he emerged as one of the war’s most vocal supporters, pushing thousands of Chechens to enlist in the Russian military.

While Kadyrov’s remarks on Sunday were not critical of Putin, they could in principle run afoul of Russia’s new law prohibiting criticism of the military, although it is unlikely that those rules would be enforced in Kadyrov’s case. The law in question was most recently applied against several councilmembers in Saint Petersburg, Russia’s second-largest city, last week after they issued a resolution calling for Putin to be removed from power and tried for treason.

The Russian military and government have each downplayed the importance of the retreat from Kharkiv claiming that it came as part of a plan to redeploy towards the contested Donbass region in eastern Ukraine. Russia’s military has not commented on its losses during the retreat or footage depicting Ukrainian soldiers gaining control of dozens of Russian tanks and other armored vehicles.