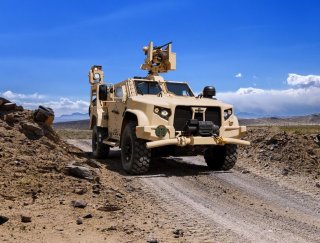 The Army has added anti-tank missiles, lasers, anti-aircraft systems and drones to its Joint Light Tactical Vehicle (JLTV) as part of an effort to keep the multi-year program aligned with fast-changing threat developments.

While underway for several years, the weapons upgrades and adjustments were cited by Oshkosh Defense as part of a statement on the Army’s recent order of 248 new JLTVs for the service. The deal underscores the significance of the vehicle and points to its multi-year trajectory, as Oshkosh has been engineering the vehicle for more than a decade. The 248 new vehicles are being added to the thousands of JLTVs which have already been delivered to the service.

Since its inception, the JLTV has been engineered with a broad series of technologies configured to adjust and modernize as new technologies emerge. While certain things like its TAK-4 independent suspension system and external configuration are likely not changed much since its initial construction, its command and control systems, weapons and technical backbone has likely been upgraded or modified substantially. For instance, emerging cyber and EW technologies, along with modern targeting and C4ISR systems all continue to be added. Oshkosh’s statement included the discussion of its having added a Remote Weapons Station up to 30mm, a technical advance giving soldiers an ability to fire heavier weapons from beneath armor cover by using a computerized video targeting screen. Drone and counter-drone technologies have also been added to the platform.

Adding newer weapons systems to the platform, such as lasers and anti-drone weapons expands the mission envelope for the vehicle, enabling it to operate under higher-threat major warfare conditions. Lasers can of course attack drones, ground targets and even enemy helicopters at long-ranges as well as perform varying degrees of optical surveillance. They can also be precise and cause less collateral damage to buildings, enemy vehicles or nearby personnel should the vehicle need to attack in an urban area. Advanced sensors, by extension, can greatly expand the reconnaissance missions for the platform as well, giving it the opportunity to function to a greater degree as a forward-operating node in a larger network.

The JLTV’s adjustment to incorporate a greater degree of air defense is also quite significant, as it aligns with a broader Army strategic move to emphasize heavier weapons and Short-Range-Air-Defense for its combat vehicles. Short Range Air Defense is a combat priority which, Army developers say, has “atrophied” in recent years during the ongoing counterinsurgency campaigns in Iraq and Afghanistan. Stryker vehicles, for instance, are now armed with an ability to vertically fire Hellfire missiles and even lasers at enemy drones and helicopters as part of the Army’s recognition that combat air defense is again emerging as a significant threat area in today’s great-power threat combat environment. Anti-tank weapons, such as a vehicle-mounted TOW missile also better enable the vehicle to support advancing armored and infantry brigades, particularly if it conducts high-risk scout missions in front of attacking units.