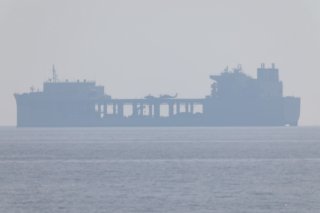 The U.S. Navy has a new helicopter carrier. Well, sort of.

The task force is in the Persian Gulf, practicing tactics for destroying enemy boats. The exercise clearly also is a show of force targeting Iran, whose large force of gun- and rocket-armed speedboats poses a serious threat to naval and commercial vessels in the Gulf.

“The operations, which are designed to enhance the capabilities of U.S. forces to respond to surface threats, have involved Puller performing as a landing base platform for the Apaches, while Cyclone-class patrol-coastal ships select simulated targets for them to engage. The guided-missile destroyer USS Paul Hamilton also participated in the joint operations,” the Navy stated.

Parsing that statement, it’s clear that the fleet has devised a new and potentially capable ship-mix that could be a preview of future deployments.

Puller, a converted tanker whose main role is to support landing craft, is using its large flight deck to function as a helicopter carrier, essentially copying a mission of the Navy’s 10 Wasp- and America-class assault ships. Hamilton is Puller’s main escort, using its radars and long-range surface-to-air missiles to shield the big, slow and lightly-armed Puller from air attacks.

The diminutive Cyclones, which lack air-defenses but pack guns and surface-to-surface missiles, meanwhile are a sort of scouting screen, patrolling around Puller and Hamilton in order to spot enemy boats. The Cyclones are the Navy’s smallest combatants aside from riverine boats and, with their shallow draughts, can access more of the Persian Gulf’s waters than larger vessels can do.

Army Apaches long have been capable of at-sea operations, but rarely actually practice these deployments. The E-model Apache, the Army’s latest, boasts a better transmission and more powerful engines compared to older models, boosting its ability to operate in the hot Middle-East environment.

All Apache models can carry guided anti-tank missiles as well as unguided rockets. They also sport a highly-accurate 30-millimeter cannon.

“The integration of U.S. Army air-weapons teams with other joint fires into the maritime environment greatly enhances our ability to expand reconnaissance and attack capability,” Capt. Peter Mirisola, commander of Hamilton’s destroyer squadron, said in a statement. “The Apaches, in coordination with our surface ships, allow us to hold an adversary at high risk at extended ranges. Combined with other joint fires, these aircraft significantly increase the precision lethality of our joint maritime forces."

It’s hard to overstate how exciting Task Force Saber is for advocates of a new fleet design for U.S. maritime forces. The Navy and U.S. Marine Corps both recognize the need to deploy their people, ships and aircraft in new ways in order to combat both the irregular threat from Iranian forces and the conventional threat from an increasingly well-armed China -- all while operating within flat overall budgets.