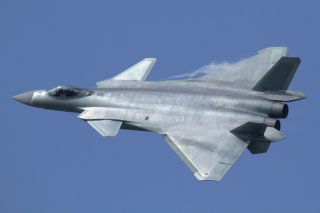 “It is certain that the J-20, as advanced new equipment, will appear on potential battlefields, including at sea, particularly when advanced warplanes of the US like the F-35 and the F-22 have been flying near China,” Song Zhongping, a Chinese defense expert, told the Chinese government-backed Global Times newspaper.

China’s push to extol the J-20 could, at least to some extent, be aimed at masking several glaring Chinese deficiencies when it comes to air power in the Pacific. China does not have a fighter jet that can duplicate the F-35-B’s short takeoff and vertical landings and is only now starting to produce its first fifth-generation, stealthy, carrier-launched fighter. Thus, when it comes to the ability to project fifth-generation air power from the sea, China is far behind the United States in terms of both technological innovation and sheer numbers.

It’s not clear how soon China’s carrier-launched J-31 might be operational, and there will be a need to produce large numbers of them to rival the U.S. F-35B and F-35C. Of course, it is not just the United States that is driving this imbalance, but U.S. Pacific allies like Japan, which is also acquiring a large number of its own F-35s as well. Chinese officials say they are revving up production of the J-20 and highlight its recently upgraded, domestically built WS-10C engine. It is not clear exactly how many J-20s the PLA has already produced, but multiple accounts suggest the number is much smaller than the hundreds of F-35s operated by the United States.

But it’s also about more than numbers: China’s land-launched J-20 may also suffer a range problem, certainly when it comes to the South China Sea. One reason China is drawing attention to its J-20 may be because it would be able to reach Taiwan on a single sortie, given that the island is only 100 miles away from mainland China. This proximity could allow the J-20 to fly attack missions over or near Taiwan and still be able to return without having to refuel. Essentially, the J-20 could present a clear threat to Taiwan and create a circumstance wherein the United States would need to forward position carriers and amphibious assault ships to ensure its F-35s are ready to counter a Chinese air assault.

The South China Sea is a different story, as the Spratly islands are roughly 500 miles off the coast of mainland China, a distance which might make it extremely difficult to reach and conduct operations near without substantial aerial refueling assets. A single J-20 sortie is unlikely to be able to reach the South China Sea and perform missions without having a ship to land on or an accompanying aerial tanker to refuel it. But the J-20 is not built to land on ships, and flying large tankers presents great risks and increases the likelihood of attack.