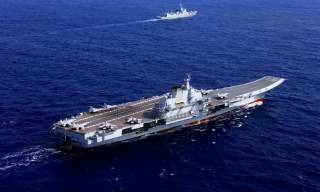 On December 17, 2019 at the sunny beach resort city of Sanya on Hainan Island, China officially commissioned its first homebuilt aircraft carrier into the PLA Navy in a ceremony attended by President Xi Jinping, following more than eighteen months of sea trials. Like her sistership Liaoning, she is named after a province in northeastern China.

The commissioning of the 315-meter long vessel four years after she was laid down in Liaoning province March 2015 by Dalian Shipbuilding is another milestone achievement for the PLA Navy that must be gauged in context: the Chinese carrier remains much less capable than its U.S. Navy counterparts, but serves as a stepping stone to a more powerful force, a point of national prestige, and potentially a platform for expeditionary missions abroad.

Below are five things that stand out about this new vessel:

China’s first aircraft carrier, the Type 001 Liaoning was actually rebuilt from the hull of an incomplete Soviet “aircraft-carrying cruiser” called the Varyag. This nomenclature refers to the fact that Varyag was intended to double as a surface combatant with powerful anti-ship missiles, unlike a typical carrier that relies on its onboard aircraft for offensive capability.

In a story that’s as wacky as it sounds, a secret cabal of Chinese military officers put a Chinese basketball star up to buying Varyag from a Ukrainian shipyard under the cover story that the incomplete vessel would be used to serve as a floating casino. Instead, it was radically overhauled and rebuilt into a pure carrier with Chinese hardware.

The Shandong, then, is based on the Varyag—Ukraine transferred the blueprints for the vessel too!—but 100% made in China. That allowed Chinese naval architects to tweak its design to be better optimized for its role in the PLA Navy. Still, it shares basic design elements, such as being conventionally powered by four steam boilers, meaning it has to refuel roughly every six days.

Because of their essentially common but not identical designs, Shandong was initially believed to be designated as a Type 001A carrier by many analysts. But the cagey Chinese government finally confirmed this December the new vessel will instead go by the Type 002 designation.

Shandong can carry more fighters than its predecessor—but won’t necessarily do so for a while.

The Liaoning can carry a total of 36 aircraft, including 24 jet fighters. For the Shandong, Chinese naval architect made the island—the built-up superstructure on a carrier’ deck—taller but occupying smaller in surface area. That affords the Shandong deck space for 44 aircraft in total, including up to 32 fighter jets. (Some sources claim a maximum of 36 jet, but its possible this figure may only be theoretically attainable were no helicopters to be carried—which is not going to happen for reasons explained below).

That’s useful but doesn’t mean the PLA Navy will be max out each carrier’s air wing, as there are rumored to be only around 50 J-15s fighters in service so far, and some of those will also be needed for land-based training and rotations. Indeed, according to the South China Morning Post article, only 30 pilots and 24 J-15s appeared to be deployed on the carrier.

One thing that bears monitoring will be whether Shandong’s air wing incorporates any J-15D electronic warfare jets equipped with jamming pods to serve alongside the regular model.  A J-15D was already spotted on Shandong’s deck in 2018.

Electronically Scanned Array radar with four antennae facing in different directions. AESA are basically today’s gold standard in radars, as they boast higher resolution, are more discreet than other powerful radars, and are much more resistant to jamming. Quality radars are vital to provide carriers with air traffic control, coordinate combat operations, and detect incoming threats.

It’s J-15 Flying Shark fighters theoretically outperform U.S. Navy Super Hornets on some metrics.  But in reality, they can’t carry nearly as much fuel and weapons.

The J-15 is copied from a prototype Sukhoi Su-33 flanker China bought from Ukraine, just like the carrier. The Su-33 is in turn of many spin-offs of Russia’s twin-engine Su-27 jet, which like its pier the F-15 Eagle, boasts extraordinary speed, range and maneuverability. Some of these performance parameters seemingly exceed those of the Super Hornet.

But the reality is quite different, because both Shandong and Liaoning rely on a ski-jump ramp for aircraft taking off—and the Su-33 and J-15 are amongst the heaviest carrier-based jets in service.  This severely limits the amount of fuel and weapons its jets can carry, in turn limiting range and combat effectiveness.

Its support aircraft also bring important capabilities to the table.

Though unlikely to be featured in a Top Gun movie (or its Chinese equivalent, Sky Hunters), naval helicopters greatly expand the versatility of carriers like the Shandong and her sister ship Liaoning. Of course, they can be useful for rescuing downed pilots or transporting personnel ashore or onto other vessels.

But they can also fulfill more specialized roles. The Shandong’s chunky ZH-18J helicopters have powerful radars that can provide early warning of incoming fighters and missiles, making its onboard jets more effective and increasing the carrier’s odds of dodging an attack.

Some commentators have also claimed the carrier will be able to operate KJ-600 airborne radar planes, which very much resemble the U.S. carrier-based E-2 Hawkeye. These would be superior to the ZH-18J due to being able to fly higher, faster and further, but there remains much skepticism that these larger turbo-prop powered aircraft could successfully operate from a ski-jump deck carrier.

Meanwhile, its ZH-18F choppers are equipped torpedoes, dipping sonars and surface-search radars that can detect protruding periscopes and snorkels, for hunting down enemy submarines. That’s an important mission due to the submarine arms race currently taking place in the Pacific, and the superior acoustic stealth of the U.S. Navy’s nuclear-powered Virginia and Ohio-class submarines.

Shandong is another stepping stone in China’s plans to build a  larger carrier fleet.

Shandong may well end up being the only Type 002 carrier to enter PLA Navy service.  That’s because the third and fourth carriers currently under construction will be larger, more capable design with a large flat deck and electromagnetic catapults that will allow onboard jets to take off with full weapons and fuel loads.

Why then did China bother with first copying the less capable Liaoning? To build up experience in building  type of ship it never has built before—and give itself more time and opportunity to train pilots and crew in carrier operations.  Afterall, even were China to somehow magically receive a Nimitz-class supercarrier overnight, it simply wouldn’t have the aircraft and experienced crew and pilots to do much with it.

Construction of the first Type 003 is reportedly fairly advanced, but its entry into service is currently delayed by difficulties developing the electromagnetic catapults critical to its functionality. This difficulty, combined with budgetary concerns, led Beijing to shelve plans to also develop two nuclear-powered super carriers. The PLA Navy may also want to finish development of a carrier-based stealth jet before committing to additional carriers so its final flight of flat tops can be tailored to accommodate the new aircraft.

For now, however, the Shandon will take center stage in PLA operations in the South China Sea from its homeport in Sanya—also close to a key nuclear ballistic missile submarine (SSBN) base—while the older Liaoning increasingly assumes the role of training and testing vessel.