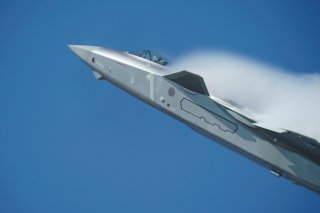 China is ramping up mass production of its J-20 fifth-generation stealth fighter at a pace that seems to reflect a desire to compete with or rival the U.S. Navy’s fifth-generation air power projection capacity.

“More J-20s have been commissioned across all the eastern, southern, western, northern and central parts of China, have flown greater distances, and are playing increasingly important roles,” the Chinese government-backed Global Times newspaper says.

While only a land-launched stealth fighter, a J-20 would certainly be within reach of Taiwan and other critical areas throughout the Pacific theater, something which would be extended by the use of PLA-Air Force YU-20 tanker aircraft able to refuel J-20s launched from mainland China.

“With the successful development of the domestic engine, the J-20 has entered mass production, and it is only a matter of time before PLA Air Force units in all parts of the country get the advanced stealth fighter jet,” the Global Times writes.

While the exact number of Chinese J-20s may not be known, a story last year in the South China Morning Post reports that China operates roughly 150 J-20s with many more in production. If true, this would certainly give the Chinese the ability to project fifth-generation air power. However, it may still operate at a deficit should it need to confront American, South Korean, and Japanese F-35s. The United States can not only deploy large numbers of F-35Cs from forward operating aircraft carriers in the Pacific, but the U.S. Marine Corps can deploy America-class amphibious assault ships armed with as many as 15 F-35s each.  The U.S. Navy’s ability to launch fifth-generation air power from the sea, when viewed in the context of Japan’s recent multi-billion F-35 buy and South Korea’s F-35s, would seem positioned to do quite well against a smaller, land-launched Chinese J-20 force.

At the same time, the Pentagon is certainly aware of China’s production capacity and the country’s ability to rev up full-scale manufacturing of new J-20s, so it is unclear how much longer the United States and its allies can sustain its now distinct fifth-generation airpower advantage. Large numbers of J-20s, coupled with the arrival of impactful numbers of carrier-launched J-31s at some point in the coming years, could help China evolve into a more credible air threat operating in the Pacific.

As far as a global footprint is concerned, China clearly lacks the ability to project fifth-generation air power from the sea in areas throughout the world, as there are not many carrier-launched J-31s just yet. It is also unclear how many forward bases China may have in strategic hotspots throughout Europe and Africa. China has recently built a large military base in Djibouti, Africa which might have the capacity to launch J-20s throughout some places in or near the Middle East, yet without a credible sea-launched fifth-generation capacity, China’s ability to truly project global power from the sea is likely to be quite limited.

As a regional threat, however, the J-20s could potentially create problems for Taiwan, parts of Japan or certainly disputed areas within the South China Sea which would be within reach of a land-launched fifth-generation stealth jet.  An inability to operate from the seas, however, would substantially limit the range and dwell-time capacity of J-20s looking to project power from mainland China.