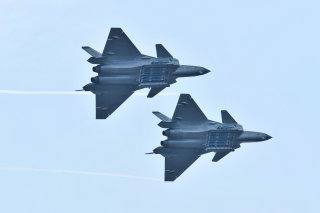 China has a well-known history of replicating, copying, and stealing U.S. weapons development secrets. U.S. officials have tracked this trend for many years. It appears to expand beyond the somewhat visible or transparent Chinese effort to “borrow” U.S. fifth-generation stealth fighter external configurations. The Defense Department has repeatedly cited concerns that the Chinese Chengdu J-20 and Shenyang J-31 Gyrfalcon look like F-35 fighter jet and F-22 Raptor. But the comparisons don’t stop there. China has built drones, armored vehicles and even aircraft carriers that look like the USS Ford.

Now, there appears to be a lesser recognized yet equally troubling Chinese effort to replicate U.S. strategies, tactics, modernization efforts, and training methods. A recently published Defense Department report, titled Military and Security Developments Involving the People’s Republic of China, shows evidence of this trend. The report states that China is increasing the “realism of its training and the effectiveness of Opposition Force units (OPFOR).”

Chinese efforts to pursue a U.S.-military-like “multi-domain” approach to future warfare is by no means new or surprising, yet there are two other areas mentioned briefly in the Defense Department’s China report that raise interesting questions.

Is China conducting exercises with much greater fidelity, scope and technological sophistication? Are Chinese wargames and war preparation methods increasingly “borrowing” from or copying U.S. approaches? The United States is well known for its ability to create OPFOR units known as “red teams.” For instance, the Air Force’s Red Flag training exercises have begun to include electronic warfare jamming or “GPS-denied” conditions. This allows warfighters to test and prepare U.S. platforms for use against the sophisticated adversaries they will face in great-power warfare.

The Air Force isn’t the only military service that has OPFOR units. The Army and Navy conduct wargames and train to fight against a military with advanced technology too. At the Army’s National Training Center at Fort Irwin, California, training aims to prepare military members for major, multi-domain mechanized warfare against a sophisticated adversary. In fact, the training center is somewhat ahead of its time. It has been deeply immersed in preparations for a great-power war for more than a decade. It was preparing for such a scenario during counterinsurgency efforts in Iraq and Afghanistan—even when the U.S. military was distracted or engaged in counterterrorism.

“Despite the COVID-19 pandemic, border clashes with India, and other significant events in 2020, the PLAA accelerated its training and fielding of equipment from the already fast pace of recent years,” according to the Defense Department report.