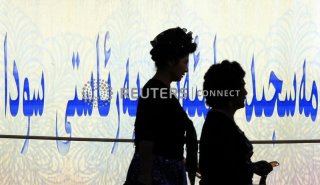 The Chinese Ministry of Commerce has announced its “strong dissatisfaction and firm opposition” to an American ban on imports from the country’s western Xinjiang Autonomous Region.

The ministry accused the United States of engaging in “economic bullying,” according to the Chinese state-run Xinhua news agency.

The ministry’s statement came after President Joe Biden signed legislation banning imports from Xinjiang unless it could be proven that they were not made using forced labor.

Zhao Lijian, a spokesman for China’s Ministry of Foreign Affairs, claimed that the measure banning the province’s goods “maliciously denigrates the human rights situation in China’s Xinjiang in disregard of facts and truth.”

The United States and China have engaged in an escalating war of words over the status of human rights in Xinjiang, with successive U.S. administrations accusing Beijing of orchestrating genocide against the province’s native Uyghur population.

Hundreds of thousands of Uyghurs, who are mostly Muslim, have been imprisoned in detention camps within the province. The Chinese have victimized the Uyghurs by forcing them to perform labor, mass indoctrination, and, in some instances, abortions. These practices have led to accusations that Beijing is attempting to ethnically cleanse the Uyghur population, warranting the charge of genocide.

China has pushed back against the accusations, claiming that the measures it has taken are necessary to prevent terrorism in the province. Also, it has claimed that the Uyghur population within Xinjiang has steadily increased, disputing the notion that it had attempted to ethnically cleanse the group. Zhao argued that the genocide charges were “vicious lies concocted by anti-China forces,” claiming that “residents of all ethnic groups [within Xinjiang] enjoy happy and fulfilling lives.”

In response to the Xinjiang boycott, state-run media outlets in China have pushed for a boycott of Western companies that have issued statements on human rights in Xinjiang. One such company, computer chip manufacturer Intel, was forced to apologize to the Chinese government after directing its suppliers to avoid purchasing silica, a raw material used in chipmaking, from mines in Xinjiang.

The dispute between the United States and China led Washington, as well as a handful of other Western nations, to institute a diplomatic boycott of the upcoming February 2022 Winter Olympics in Beijing.