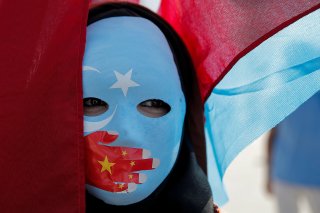 The U.S. Treasury Department imposed economic sanctions on China for human-rights abuses on Friday. Soon after, Chinese officials criticized Washington, arguing that its actions were “reckless” and that Beijing would find ways to retaliate against the United States.

Wang Wenbin, the spokesman for China’s foreign ministry, claimed on Monday that the sanctions represented the “wrong decision” and insisted that the United States “stop interfering in China’s internal affairs and harming China’s interests.”

“If the U.S. acts recklessly, China will take effective measures to strike back resolutely,” the spokesman said, although he did not specify which measures would be used.

U.S. sanctions were mostly placed on Chinese individuals and firms involved in human-rights violations in the country’s western Xinjiang province, where an ethnic cleansing campaign has taken place against the native Muslim Uyghur population. This campaign has been recognized as a genocide by a number of Western countries, including the United States, Canada, and the United Kingdom.

Wang defended China’s treatment of the Uyghurs. He claimed that its policies—including the placement of more than one million Uyghurs indefinitely in detention camps—were necessary “to combat violence, terrorism, separatism, and religious extremist forces.”

Additionally, the U.S. Treasury Department singled out the Chinese company SenseTime, which has developed an artificial intelligence algorithm used to recognize a person’s ethnicity, for sanctions. U.S. Treasury Department officials added it to a list of “Chinese military-industrial complex companies.” The sanctions led it to postpone its initial public offering, which was slated to take place on the Hong Kong Stock Exchange.

Treasury sanctions were also placed against Chinese groups that did business in Myanmar and North Korea—two other governments associated with human-rights abuses.

The sanctions coincide with President Joe Biden’s Summit for Democracy, a two-day conference intended to unite democratic nations and help them pursue similar policies with regard to non-democratic countries such as China.

China, which was not invited to the summit, has fiercely criticized it in state-run outlets and in Western ones. Wang opined on Monday that the summit betrayed America’s “true nature as a destroyer of democracy while stripping it of its disguise as a defender.”

Chinese media have taken a defensive stance and emphasized China’s democratic characteristics, which includes the presence of its National People’s Congress, a large legislative body with representatives from across the country. The National People’s Congress has been criticized for its failure to act independently from the agenda of President Xi Jinping and the other members of the small but highly influential Politburo Standing Committee.