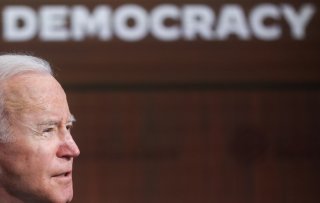 More than one hundred world leaders attended the first day of President Joe Biden’s Summit for Democracy on Thursday, at which he urged them to “lock arms” to safeguard democratic freedoms and human rights.

Biden described the trend of rising authoritarianism, which has led to a rollback in democratic states over the past twenty years, as the “defining challenge” of the twenty-first century.

The two-day virtual event began on Thursday morning and is scheduled to end on Friday afternoon. One hundred and eleven leaders from six continents were invited, as were a number of civil society activists.

The summit is the first of two, with a second, in-person meeting planned for 2022. Biden indicated that the second summit would be gauged as a “progress report” on democratization.

“We stand at an inflection point in our history,” Biden told the attendees on Thursday morning. “The choices we make in my view, in this moment, are going to fundamentally determine the direction our world is going to take in the coming decades.”

“Will we allow the backward slide of rights and democracy to continue unchecked?” the president asked. “Or will we together have a vision . . . and courage to once more lead the march of human progress and human freedom forward?”

The United States has had its own experiences with democratic backsliding. After the election of President Donald Trump, the Economist Intelligence Unit (EIU) downgraded it in ranking from a “full democracy” to a “flawed democracy,” where it remains.

Perceptions of instability in the United States were reinforced by the events of January 6, 2021, when a mob intending to overturn the result of the 2020 presidential election stormed the U.S. Capitol building. Around 650 members of the mob have since been arrested, but the event was highlighted as an example of the flaws in America’s political system in Beijing and Moscow.

The summit comes as Biden has experienced mounting domestic challenges; his approval rating has declined precipitously since he entered office and the legislation he touted during the summit to protect voting rights remains stalled in the Senate, which is where Republican leadership has threatened to filibuster it.

U.S. rivals around the world, particularly Russia and China, have condemned the summit, with the Russian and Chinese ambassadors jointly accusing Biden of maintaining a “Cold-War mentality” in his interactions with them. In particular, China has been incensed by the participation of Taiwan, the self-governing island it claims as its own, in the event.