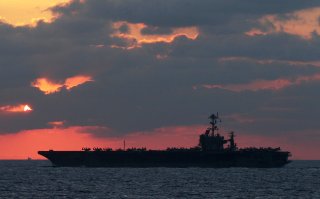 China is once again ratcheting up rhetoric about its territorial ambitions in the South China Sea, accusing the United States of trespassing into its waters and claiming to have “expelled” a U.S. warship transiting in its territory.

It was a familiar scene, wherein a U.S. Navy warship sailed within the twelve-mile boundary of island territory claimed by China in the South China Sea. The USS Benfold was described to have been on a mission to “assert its navigational rights and freedoms” as part of a clear attempt to send the message that the United States regards China’s claims as phony and therefore continues to assert its legal right to operate wherever international law allows.

“Unlawful and sweeping maritime claims in the South China Sea pose a serious threat to the freedom of the seas, including the freedoms of navigation and overflight, free trade and unimpeded commerce, and freedom of economic opportunity for South China Sea littoral nations,” a Navy report on the destroyer’s passage says.

Freedom of Navigation Exercises, also known as FONOPs, have now been going on for years as a way for the U.S. Navy and its SouthEast Asian allies to challenge and refute China’s territorial claims in the region. Territory near the region’s Spratly Islands has long been claimed by China, Vietnam, Taiwan, Malaysia, Thailand and others, and there has over the course of many years, not been any kind of clear resolution.

The U.S. Navy bases its FONOPs rationale upon the parameters outlined in the 1982 Law of the Sea Convention which stipulates that twelve miles of ocean around a given country’s territorial coastline amounts to that country’s territory. For this reason, FONOPs include instances when U.S. Navy ships deliberately sail within the twelve-mile boundary of areas claimed by China to challenge what the Pentagon regards as phony or illegitimate Chinese territorial claims.

“The 1982 Law of the Sea Convention provides for certain rights and freedoms and other lawful uses of the sea to all nations. The international community has an enduring role in preserving the freedom of the seas, which is critical to global security, stability, and prosperity,” the Navy report says.

China’s war of words did seem to reach a level of intensity. In fact, the Chinese Communist Party’s mouthpiece, the Global Times, noted that the PLA “expelled” a U.S. Navy destroyer that “trespassed” into Chinese territorial waters in the South China Sea. It described the “freedom of navigation” provocations as “illegal and invalid.”

“Without authorization from the Chinese government, the US guided missile destroyer USS Benfold illegally trespassed into China’s territorial waters of Xisha,” according to the Global Times. “The Xisha Islands are an inherent territory of China, and the US military’s move seriously violated China's sovereignty and security.”

The communist publication went on to claim that the PLA organized air and sea forces to track and monitor the U.S. destroyer and, “warn it away,” however there is no mention of a warning or any communication between the U.S. and Chinese forces cited in the U.S. Navy report.

While in one sense these kinds of exchanges and activities have become somewhat routine. However, there is mounting concern that China might be growing closer to launching an attack on Taiwan, and there continue to be massive amounts of Chinese drill, sea and air patrols as well as specific war preparation operations.