China Should Fear the Coronavirus. Look What Plague Did to Ancient Athens. 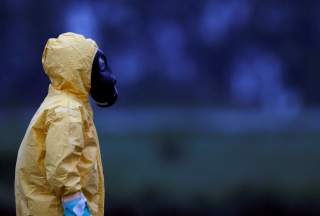 Epidemics rank among the worst traumas that can befall a society. Their impact goes far beyond the sheer loss of human lives, every one of them valuable. Disease can recast the fates of peoples, generally for the worse. Small wonder the Bible lists plague among the Four Horsemen of the Apocalypse. Pestilence, prophesies the Book of Revelation, will ravage the earth in company with Famine, War, and Death—preparing the way for the Last Judgment. At present China is experiencing a foretaste of the end times in the form of the novel coronavirus, an affliction that first surfaced in Wuhan late last December. Fears of contagion prompted the public-health authorities to order a quarantine that left this city of 11 million a ghost town.

No quarantine is perfect, China’s least of all. The Chinese Communist Party hardly helped matters by dispatching strongmen to harass and silence Dr. Li Wenliang, who first reported the coronavirus on social media, for “making false comments” and “spreading rumors.” False, of course, means anything that embarrasses Beijing, including inconvenient facts. Delaying and dissembling in the midst of a public-health crisis is a hazardous business. Stricken travelers have since carried the coronavirus beyond Wuhan and beyond China’s borders. It remains anyone’s guess across how much of the earth’s surface the fell rider will gallop, and how many souls he will harvest along his way.

Not biblical prophecy but history furnishes a glimpse of the political, social, and cultural—as well as human—costs the dread cavalry may exact. Contagion struck Athens during the second year of the Peloponnesian War, the imperial city-state’s twenty-seven-year struggle against rival Sparta (431-404 B.C.). Military strategy made Athens an incubator for disease. “First citizen” Pericles had talked the democratic assembly into abandoning the countryside outside the city walls to the vaunted Spartan infantry, bringing the populace within the walls, and dispatching the Athenian navy to raid Peloponnesian coasts in hopes of inducing the Spartan leadership to sue for peace.

Pericles’ strategic logic was impeccable. Avoiding the brunt of a foe’s power while harnessing your advantages to productive effect is Strategy 101. But hunkering down within the “long walls” enclosing Athens and the nearby seaport of Piraeus brought on perverse consequences of colossal import.

The disease vector evidently made its way across the Mediterranean and Aegean seas from North Africa, presumably carried by infected crewmen on board a merchant ship. Then as now, there were hidden perils to seafaring and economic interconnectedness. Once the outbreak hit the Piraeus, infection was transmitted from host to host within the overcrowded city. Historian Donald Kagan estimates that some one-third of the populace fell as illness coursed through the city. Imagine upwards of 400 million Chinese perishing from the coronavirus by 2022—or upwards of 100 million Americans, to bring the comparison home—and you get some inkling of the catastrophe’s proportions for Athenians.

The exact nature of the disease remains a mystery two millennia hence even though Thucydides, the prime chronicler of the Peloponnesian War, catalogs its symptoms in some detail. It almost seemed that some malign deity had designed the plague to play havoc with Athenian politics, society, and culture. And indeed, some citizens interpreted it as the gods’ retribution for their sins. They recalled, for instance, that the oracle had once foretold a Dorian war—Spartans were Dorians by kinship—accompanied by a plague. Think about the political fallout that ensued. The combination of disease within the ramparts, hostile hosts swarming the backcountry outside, and paucity of results from Pericles’ hit-and-run naval strategy superempowered the peace faction within the city to dispatch envoys to Sparta.

The Spartan leadership rebuffed the peace entreaty, viewing Athens’ misfortune as Spartan opportunity. And why not? You can get more, more easily, more quickly from a foe consumed with internal distress. Frustrated at the embassy’s failure, peace advocates deemed Pericles blameworthy for the city’s plight. The first citizen convened the assembly to defuse the revolt and defend his handling of diplomacy and war. He prevailed on questions of public policy, as Kagan notes. The assembly fined him for corruption, yet ultimately reelected him as strategos, or general. His strategy remained in place—for a time—owing to his rhetorical fluency.

But not for long. Loss of life en masse is what vexes public-health specialists most, but sometimes the death of a single individual can beget massive repercussions. So it was with classical Athens. Pericles succumbed after a wasting bout of the plague. Illness had already enfeebled his usually upbeat spirit along with his body, muting his voice in Athenian politics. After sickness claimed the first citizen, no statesman of comparable stature replaced him. Instead, recalls Thucydides, pretenders took to struggling for preeminence. They pandered to popular opinion in hopes of burnishing their political standing and amassing clout. In the process the assembly cast off the self-restraint Pericles had infused into policy debates. Athens flung itself into military adventures—including, ultimately, an invasion of Sicily that cost the city its entire expeditionary army and fleet.

Epidemics, it seems, can have mercurial effects on a stricken state’s politics. President Xi Jinping could face a backlash within the Chinese Communist Party, just as factional strife wracked the Athenian assembly. Xi could be unseated, he could launch a crackdown that consolidates his rule, or events could take some unforeseeable course. There is no guarantee, furthermore, that a China battling the coronavirus will be an introspective China, or a cautious one in military affairs. Depending on the trajectory domestic politics takes, China could embark on venturesome if not reckless policies toward its neighbors—much as Athens defied political and strategic logic, hurling itself into fresh enterprises despite its weakened state. Conditions in China, in other words, bear close monitoring—and not just in the interest of containing disease.

And then there were the malady’s social, cultural, and religious effects. Thucydides recounts how plague severed the ties of fellow-feeling—what Kagan calls “the most sacred bonds of civilization”—that held Athenian society together. Despair—to my mind a fifth horseman of the Apocalypse—ran rampant among Athenians as disease raged within the walls and enemies pillaged outside. Sickness and death were lonely experiences. No one wanted to contract the disease, so everyone shunned the infected. Meanwhile lawlessness took hold throughout the city. Few saw much point in obeying divine law, as the righteous appeared as prone to sicken and die as the licentious. Nor was there much point in obeying civil law; why bother when offenders would never live to stand trial anyway?

As moral and ethical strictures collapsed, Athenians gave vent to their basest impulses and excesses. All manner of riotous living ensued. Why not indulge today if tomorrow you die?

Worst of all, religion—in particular funeral rites—withered as Athenians came to dread the possibility of infection from the dead or near-dead. Kagan graphically describes how the mortally sick were heaped up on city streets or, if able, wandered around in a vain search for succor. So graphic were memories of these times that classicist Victor Davis Hanson maintains that they coarsened Athenian society. Toward the war’s endgame, for example, the assembly tried the victors from the naval battle of Arginusae and sentenced them to death. Why? Because heavy weather blew up after the battle and prevented the fleet from recovering the bodies of slain mariners for burial. Its commanders bore the blame in Athenian eyes.

Hanson speculates, reasonably enough, that Athenians still felt guilty about neglecting their religious duty during the plague. They overreacted to naval commanders’ failure at Arginusae, taking actions that were not just morally suspect but self-defeating. Try recruiting talented commanders when candidates know they can win in combat yet pay the ultimate penalty for some secondary failing that’s beyond their control. And indeed, the quality of Athenian leadership did suffer during the late going in the Peloponnesian War, doubtless contributing to final defeat. Barbarity, then, is a likely result of a public-health cataclysm. And it can goad the leadership of an afflicted society into doing foolish things.

Now, we shouldn’t overdo the parallels between then and now. For one thing, China has it good relative to classical Athens. Just two horsemen, pestilence and death, are abroad in the land whereas war was already upon Athens when the plague struck the Piraeus. War has not appeared on the scene in East Asia, and will not unless Beijing makes the conscious choice to lash out. China can spare itself that part of an Athenian fate. For another, these are very different societies. Athens was a raucous direct democracy confined to a small, rocky parcel of land, whereas China is a continent-spanning autocracy on which party chieftains have superimposed an Orwellian superstate to keep the populace compliant.

There are disadvantages as well as advantages to China’s political system vis-à-vis that of ancient Athens. If the party line comes first in everything China’s governing regime does, as well as for ordinary Chinese, then Beijing is denying itself the fruits of open and free debate. It is cramping its thinking, and thus its creativity. It is apt to do dumb things—things like suppressing news of a potential pandemic until it is too late to confine the contagion within a manageable area. Groupthink makes groups of people stupid. Groupthink enforced with guns is worse.