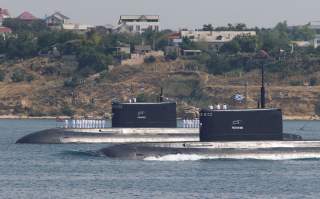 These are surely interesting times for those tasked with watching Chinese military modernization. Ideas once considered far-fetched, such as a Chinese aircraft carrier or anti-ship ballistic missiles (ASBM), now seem rather normal. New and capable Chinese platforms, ranging from the Type 055 cruiser to a highly anticipated next-generation long-range bomber, are certain to have an impact on the balance of power in the western Pacific in the coming decades. Additionally, every few months Beijing seems to roll out a new type of missile, with more and more impressive capabilities.

In this series of articles, your Dragon Eye has tried to keep a focus on developments in the undersea realm, since that is an area of strategic competition where the U.S. competitive edge has seemed to be most secure. Given that assumption, the latest bombshell, appearing in the South China Morning Post on July 23 will be making some waves on the Potomac and well beyond. Relying apparently on an interview with the director of marine technology equipment at the Shenyang Institute of Automation, the article claims that the Chinese Navy is now building “a series of extra-large unmanned underwater vehicles, XLUUVs.”

As that impressively detailed article is in English and readers may peruse it on their own, here we will just briefly review some highlights. The South China Morning Post article uses the term “robotic submarines” or “AI subs,” suggesting that these vessels are indeed substantially larger than the unmanned underwater vehicles (UUVs) that many nations, including China, are known to have been working on. Among the missions that the new Chinese unmanned submarines will take up include “… reconnaissance … mine placement … [and] even suicide attacks against enemy vessels.” The article mentions that they can set up ambushes for enemy vessels at “geographical chokepoints.” They could “work with manned submarines as a scout or decoy to draw fire and expose the position of an adversary. If necessary, they can ram into a high-value target.” Furthermore, these “giants” will be capable of receiving instructions from ground-based control centers and “will start with relatively simple tasks,” when they are fielded in the early 2020s. Among the most interesting, if ambiguous sentences, in the piece is the statement: “Their energy supply comes from diesel-electric engines or other power sources that ensure continuous operation for months.”

It is perhaps not coincidental that this revelation follows after months of intensive writing in the Chinese defense press about Russia’s “Status-6” large-size UUV that is both nuclear-powered and also apparently armed with a massive nuclear warhead. The intention here is not to suggest that the Chinese and Russian programs are directly related. Indeed, there seem to be rather distinct differences based, at least in part, on their respective goals. Nevertheless, Chinese commentary regarding Russia’s Status-6 [状况-6] could perhaps help to reveal certain “coming attractions” from Beijing’s robotic submarine program.

A brief note in the January 2018 edition of the Chinese Navy magazine Navy Today [当代海军], described Russia’s Status-6 as a “doomsday [世界未日]” weapon. The March 2018 edition of the naval magazine Naval and Merchant Ships [舰船知识] offered a schematic drawing of the Russian weapon for its Chinese readership. Besides citing the weapon’s extraordinary range (10,000km), depth (1,000m) and speed (100 knots), that schematic also notes that the Status-6 carries a nuclear warhead with the explosive power that is “twice the force of the ‘Tsar’ hydrogen bomb [‘沙皇氢弹’ 的两倍],” which was the largest nuclear explosion ever witnessed by humanity. The illustration depicts a Type 09851 Khabarovsk-class (Belgorod) submarine that is configured to carry six of these ominous weapons. Along with the exceedingly debilitating radiation poisoning that would accompany the use of the weapon, the graphic also projects that the weapon is designed to create a “500 meter tsunami [500米海啸]” that would obliterate shore targets, including obviously port cities. Also quite disturbing is a July 2018 note in the Global Times [环球时报] that vividly illustrates with Russian-language diagrams how Status-6 is equally effective against surface ship targets [надводная цель], as against a shore targets [береговая цель], thus forming an “assassin’s mace weapon against aircraft carriers [航母杀手].”

Yet, Chinese defense media did not just start writing about this unique Russian weapon system in 2018. Quite to the contrary, a somewhat detailed analysis already appeared in China Defense Report [中国国防方报] in late 2015. And a rather specific report also appeared in fall 2016 (issue no. 209) in the Chinese magazine Weapon [兵器]. That report had provided a full picture of the development process for the T-5 Soviet nuclear torpedo, including detailed diagrams of test results (not available at link regrettably) and differentiating between various tests undertaken at Novaya Zemlya Island [新地岛] in the fall of 1957. That particular article may imply a very close Chinese study of the Soviet development of naval tactical nuclear weaponry, especially torpedoes.

A more recent and related Chinese-language article from the magazine Ordnance Science and Technology [兵工科技] from spring 2018 (no. 8) also deserves a moment of reflection. The title of that article about Russian UUVs, mini-subs, and torpedoes may indeed convey the trend: "Going toward Nuclear Power [走向核动力]." That article does explain that "given technological breakthroughs in the miniaturization of nuclear reactors over the last few years, that the nuclear propulsion question has not been difficult to resolve [以及近年来在核反应堆小型化技术上的突破核动力技术不难解决]." This analysis appraises the Status-6 and suggests that its speed (reaching 100 knots) is "quite shocking [非常惊人]." The article posits that the most likely explanation is that Status-6 relies on Russia's hyper cavitation drag reduction technology [超空泡减阻技术]. Much of the rest of that article is devoted to explaining the likely significant impact of hyper cavitation technology on the future of naval warfare.

It is unknown whether the Chinese robotic submarines mentioned in the South China Morning Post article will employ either nuclear reactors or hyper cavitation technology. Nor is it clear, as indicated in the introduction, that Beijing and Moscow are cooperating in this ultra-sensitive area of technological development. Although China, like Russia, has been extremely perturbed by U.S. development of missile defenses, there is no direct evidence (as of yet) to suggest that China is seriously considering employing UUVs or robotic submarines as "doomsday devices" in the Russian style. Still, these possibilities cannot be ruled out either. As current American foreign policy appears to apply strategic pressure against both Russia and China simultaneously, there should be no particular surprise in learning that Beijing and Moscow could well be exploring ever greater military synergies, including in the undersea domain.