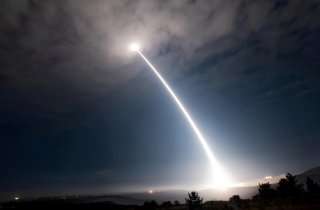 Chinese physicists are experimenting with disabling satellites in space to disrupt the communications and surveillance capabilities of other countries—namely, the United States.

According to a recent South China Morning Post report, the physicists simulated a nuclear explosion. The results of their experiment indicate that a modestly powerful atomic blast in space could interrupt satellite networks, if not destroy them outright.

“The blast could turn air molecules into radioactive particles and produce a cloud with a shape similar to an upside down pear, said nuclear physicist Liu Li and his colleagues in a paper published in the peer-reviewed journal Nuclear Techniques on October 15,” the South China Morning Post report explained. “In about five minutes, the cloud could rise to an altitude of nearly 500 km and spread over an area of more than 140,000 sq km.”

“The strong residual radiation of the debris cloud may cause failures of spacecraft moving in it, such as satellites, or even cause direct damage that can lead to destruction,” the researchers quoted by the Post said.

Space is a vacuum. And lacking air, the fallout of a nuclear explosion in space would not produce much of a radiation cloud, with the particles instead captured by Earth’s magnetic field. However, a nuclear blast close to space could effectively put satellites out of commission.

A targeted blast close to space could shoot a cloud of radiation up into space in the form of a giant mushroom cloud, blasting nuclear particles up spaceward that would then fall back to Earth and avoid blanket coverage of a larger area of space.

“Due to the high concentration of fission products inside the debris cloud, the released gamma rays and beta particles are strong, making their effects on spacecraft and communications within the affected area stronger,” the Chinese researchers wrote.

The strategy, though hypothetical, could prove incredibly potent, even as the United States and other countries expand their satellite networks. Networks like SpaceX’s Starlink system could be significantly affected by a near-space blast of the kind simulated by the Chinese researchers.

The Chinese identified Starlink as a potential national security threat, a nod to the system’s highly distributed nature and ability to connect virtually any place on Earth with the internet over a target region.

Though the chances of the conflict in Ukraine going nuclear are infinitesimally small—Russia is very unlikely to detonate even a small nuclear weapon—the Chinese hypothesis of a near-space nuclear strike against a grouping of satellites could prove to be very effective.